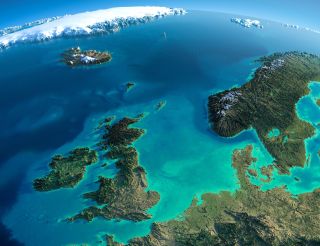 Doggerland once covered a vast swath of land between what is now the east coast of England and the European mainland.
(Image: © Anton Balazh/Shutterstock)

Deep beneath the North Sea, scientists have discovered a fossilized forest that could hold traces of prehistoric early humans who lived there around 10,000 years ago, before the land slipped beneath the waves a few thousand years later.

The discovery gives the researchers new hope in their search for "lost" Middle Stone Age — or Mesolithic — settlements of hunter-gatherers, because the find shows that they have found a particular type of exposed ancient landscape.

The scientists took sediment samples from the submerged fossilized forest during their 11-day voyage in the North Sea aboard the research ship RV Belgica, in the Doggerland region known as Brown Bank or Brown Ridge. The scientists say they are certain they are close to finding traces of a prehistoric human settlement in the submerged lands. [See Images of a Treasure Trove Found Beneath North Sea]

"We are absolutely dead sure that we are very close to a settlement," said archaeologist Vincent Gaffney of Bradford University in the U.K., one of the project leaders. "The numbers of artifacts historically from that region tell us there is something there."

"We have now identified the areas where the Mesolithic land surface is close to the surface [of the seafloor]," he said. "So we can use the dredges or grabs to get larger samples of whatever that surface is."

The scientists now plan to revisit the Brown Bank area on a Dutch research ship in the fall, with heavier dredging equipment that will let them take more samples from the submerged fossilized forest, Gaffney said.

Doggerland once covered thousands of square miles between what is now the east coast of England and the European mainland. It is named after the nearby Dogger Bank, a shallow region frequented in the Middle Ages by Dutch fishing boats called doggers.

The region was exposed as the northern icecap receded at the end of the last Ice Age, about 12,000 years ago, and became a vast, forested plain, populated by herds of animals and communities of early human hunter-gatherers.

But the land became submerged as sea levels continued to rise; Doggerland slipped beneath the North Sea about 8,000 years ago — leaving Britain as a group of islands off of the coast of Europe.

Over the years, the so-called Brown Bank area between England and the Netherlands has given up numerous archaeological finds to fishing boats and dredges, including ancient human bones, flint tools, spear points and even carved-bone artworks.

An area as large as Doggerland would have contained many different human hunter-gatherer groups, totaling thousands of people, Gaffney told Live Science.

The exposed underwater landscape of Brown Bank is the best opportunity for finding any of them, he said.

Thousands of sediment cores were taken from North Sea in the past for different reasons, including offshore wind farms, Gaffney said, but the latest expedition was "a chance to prioritize the finding of human settlements in the center of the North Sea."

Searching for the Stone Age

During the latest expedition, the researchers used specialized dredges to grab samples from Brown Bank, but the hard petrified wood of the submerged, fossilized forest made that difficult, and heavier dredges will be used the next time that the researchers explore the area by ship. [30 of the World's Most Valuable Treasures That Are Still Missing]

Some samples had also shown layers of compressed peat just below the seafloor, which indicated former wetlands that may have provided nearly perfect conditions for early human habitation. "The optimum areas are wetlands, where there [area]water, birds, fish and shellfish," Gaffney said.

The sediment samples from the latest expedition are now being studied; the analysis will take several months, he said. Data from the expedition will also be used to further update archaeological maps of submerged Doggerland, which have been prepared from seismic surveys and sediment samples over several years, Gaffney said.

The existing maps of Doggerland show the now-submerged locations of what once were coastlines, rivers, lakes and wetlands — even a giant saltmarsh. "I is a massive landscape underneath the sea,"the researchers said,

But the maps also show that parts of the submerged lands are completely covered by relatively modern sediments, dumped by some of the largest rivers in Europe, such as the Rhine and the Meuse, Gaffney said.

Areas like Brown Bank were especially important to archaeologists, because the Stone Age landscape there was exposed, or within a few inches of the surface of the seafloor.

The researchers now hope that their future expeditions to Brown Bank yield decisive signs of human settlement there — such as ancient human bones or even human-made artifacts. "We are very close to finding this settlement," Gaffney said. "It is there, we know it is — we need just that little bit of luck and good weather to get there."

The team plan to revisit the area aboard a Dutch research ship in the fall, with heavier dredging equipment that will facilitate taking more samples from the submerged landscape, Gaffney said.