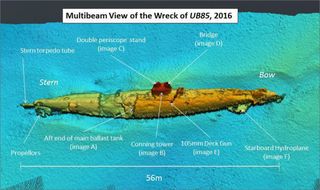 A composite image from multibeam sonar scans of the German submarine wreck on the seafloor off the coast of southwest Scotland.
(Image: © Scottish Power)

The wreck of a World War I German submarine has been discovered off the coast of Scotland by marine engineers surveying the route of an undersea power cable.

Researchers said they think the wreck is one of two German U-boats sunk by British patrol ships in the Irish Sea in 1918 — including one that was supposedly attacked by a sea monster, according to an internet legend.

Marine archeologist and historian Innes McCartney, from Bournemouth University in the United Kingdom, said the submarine wreck was in reasonably good shape, considering it has spent almost 100 years on the seafloor at a depth of 340 feet (about 100 meters). [See Photos of the Submarine Wreck Discovered Off Coast of Scotland]

"When all the other wartime shipwrecks have crumbled down to nothing, the submarines will still be there, because they're made to withstand the [underwater] marine environment," McCartney told Live Science.

McCartney has studied video of the submarine wreck gathered by a remotely operated underwater vehicle (ROV) and geophysical data gathered by instruments on the marine survey ship that located the wreck while charting the seafloor. The ship was helping to plan a route through the Irish Sea for an undersea power cable between southwest Scotland and northwest England.

At least 12 British and German submarines are known to have sunk in the area during World War I, but McCartney has been able to identify the latest wreck as a German UB III-class submarine from its external dimensions and fittings.

"The UB III-class was one of the more successful U-boats that that the Germans experimented with during the First World War, to the extent that in many ways it is the design that became the legendary Type VII U-boat of World War II," McCartney said.

McCartney pieced together another clue about the wreck's identity by studying images of the submarine's single deck gun, mounted forward of the conning tower — the armored platform near the middle of the U-boat that was used as a lookout and control center when the submarine was on the surface

"The UB III-class had some modifications made to it at the end of 1917, the most important of which was that they up-gunned it from an 88-mm to a 105-mm gun," McCartney said. "For about six months, the U-boats had this gun, but then they realized they'd been losing some U-boats in accidents because the gun was so heavy, so they took it off and went back to the older 88."

Because the latest wreck has a 105-mm gun, McCartney has been able to narrow down the possibilities to two UB III submarines known to have sunk in the area in April 1918. Both submarines had made their way from Germany around the north of Scotland and into the Irish Sea to attack British shipping, according to McCartney.

"We knew where they were because they were chattering on the radio, and we had [radio] direction-finding stations around Britain that would have tracked their movements reasonably accurately," he said. "So that's why there were British patrol craft in the area, and that's why both of the submarines were caught on the surface recharging their batteries."

According to British war records, UB-82 was sunk by two British patrol boats on April 17, 1918, resulting in the loss of all 37 crewmembers on board the submarine. UB-85 was sunk on April 30, 1918, by the British patrol ship HMS Coreopsis, but all of that submarine's crewmembers were rescued before it sank. [Sunken Treasures: The Curious Science of 7 Famous Shipwrecks]

McCartney said any further efforts to identify the newfound submarine would probably need to wait until researchers find the wreck of the other UB III-class submarine known to have sunk in the area.

"It would be nice for the other one to show up, which it will do — these things are being found so quickly these days," he said. "And then you've got the two, and it may be possible simply by looking at the damage compared to the combat reports from both instances and the positional analysis to be fairly certain."

If the latest wreck does turn out to be UB-85, it's a vessel that has already found its way into legend — on the internet, at least.

McCartney explained that a story had circulated on the internet for several years that the captain and crew of UB-85 reported their submarine was attacked by a sea monster, which damaged the vessel and forced it to stay on the surface, where it was spotted by the HMS Coreopsis.

But McCartney's research has found no historic basis for the story, which first appeared online, without any provenance, around 2005. He noted that neither the captain of UB-85 nor any of the crew mentioned a sea monster when they were interrogated by British naval intelligence after their rescue.

The story of UB-85 and the sea monster "falls into a longer trend going back at least to the 1930s of these outlandish sea tales being appended to First World War German submarines," McCartney said. "I don't know why it is, but the first U-boat war just attracts these stories — you get haunted submarines, like UB-65 which [supposedly] had a dead crewmember who haunted the boat, and then UB-28 — another sea monster is supposed to have attacked that one.”

McCartney also ruled out any connection between the fate of UB-85 and Scotland's most famous legendary water beast, Nessie the Loch Ness Monster. "But it's nice to think Nessie was doing her bit for the war effort," he said.