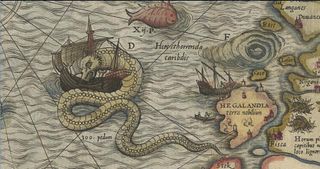 One of the classic images of a sea monster on a map: a giant sea-serpent attacks a ship off the coast of Norway on Olaus Magnus’s Carta marina of 1539, this image from the 1572 edition.
(Image: © National Library of Sweden, shelfmark KoB 1 ab)

WASHINGTON — The iconic sea serpents, mermaids and other mythical creatures found on world maps from medieval and Renaissance times splash to life on the pages of a new book.

Chet Van Duzer's "Sea Monsters on Medieval and Renaissance Maps" (British Library, 2013) charts the evolution of the mythical creatures that adorned atlases from the 10th century through the 17th century. Cartographers used the beastly art to illustrate mysterious, unexplored regions of the globe and the possible dangers of seafaring.

Despite their wild appearance, many of these creatures were based on real animals.

"The creatures look purely fantastic. They all look like they were just made up," Van Duzer, a map historian at the Library of Congress, said here Thursday (Sept. 5) in a talk about his book. "But, in fact, a lot of them come from what were considered, at the time, scientific sources." [In Images: Ancient Maps and Sea Monsters]

Sea monsters on maps run the gamut from menacing sea serpents to improbable lion-fish hybrids. Many cartographers simply copied these sea monsters from illustrated encyclopedias, Van Duzer told LiveScience. At other times, particularly a period in the 16th century, mapmakers took some poetic license with the animals (like terrestrial-aquatic hybrid animals).

But depictions of these creatures have been studied very little, Van Duzer said. Though people in modern times typically think of monsters as mythical beasts, whales and walruses were considered monsters in medieval and Renaissance times.

In his book, Van Duzer, who was a 2012 Kluge fellow at the Library of Congress and has since joined its staff, charts the origin of sea monsters from "mappa mundi," medieval European maps of the world; nautical maps; and Ptolemy's Geography, a treatise by the Greco-Roman mathematician and scientist Claudius Ptolemy, which contained an atlas of the known world during the second century.

Mappa mundi aren't the most geographically accurate maps, but they contain a treasure trove of bizarre animals. One illustration depicts a man in the belly of a monster, most likely a reference to the biblical story of Jonah and the whale. Another shows a creature with the head of a chicken and the body of a fish. "Every land creature had an equivalent in the sea," Van Duzer said.

A Latin version of Ptolemy's Geography known as the Madrid manuscript is the only version that contains sea monsters. Close inspection of the map reveals the sea monsters were drawn by an expert — likely an add-on to increase the map's sale value, Van Duzer said.

Dangers of the deep

These monstrous creatures suggest a world full of dangers lurking in distant oceans. Gigantic octopuses drag ships and sailors into the sea, and seductive sirens flaunt their beauty.

Whales feature prominently in medieval and Renaissance maps. Many sketches allude to an ancient story about sailors mistaking a whale for an island. In the story, sailors anchor their ship to the whale's back and light a fire to cook food. When the whale feels the fire's heat, it plunges into the deep, carrying the ship and sailors along with it.

Portrayals of whales and other map creatures became more realistic during the early 17th century. Maps from this era show ships exerting dominion over the beasts of the ocean. Eventually, the beasts disappeared from maps altogether.