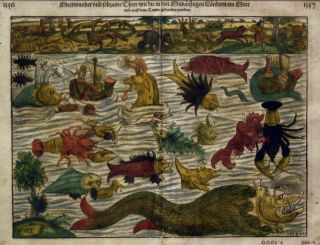 A collection of the weird and mysterious creatures found on Olaus Magnus's 16th-century "Carta marina," or "map of the sea."
(Image: © Public domain)

From the Loch Ness Monster to the Kraken, sea monsters still capture the imagination centuries after medieval cartographers doodled them in the blank spots of their maps. But to Charles Paxton, a researcher at the University of St. Andrews in Scotland, sea monster sightings are more than fish tales.

Paxton is no wild-eyed cryptozoologist who spends his weekends imagining Bigfoot behind every tree. He's a fisheries ecologist and statistician who believes that, with the right methods, anecdotes about mysterious monsters can become scientific data to tell us about human perception and the odd reports that science can't fully explain.

On July 12, Paxton and other bonafide, peer-reviewed researchers like him will discuss ways to bring cryptozoology into the scientific fold at the Zoological Society of London Communicating Science event "Cryptozoology: Science or Pseudoscience?"

Ahead of the event, Paxton spoke with LiveScience about sea monster sightings, the likelihood of unknown beasts roaming the sea, and why, before you report a sea serpent, you should always make sure you're not looking at a sexually aroused whale.

LiveScience: What drives you to study sea monster sightings?

Paxton: Several reasons. Actually, probably the first is I'm a big kid and I thought it was an interesting set of questions. A more proper scientific reason is that I'm interested in why people believe the things they believe, especially if their beliefs are non-mainstream. And the third reason I got interested is it's important to understand how science tries to relate to anomalous data, data that doesn’t quite fit into our existing paradigms.

LiveScience: You've lumped old sea monster sightings together to study them statistically. What did you find?

This implies to me that there's a huge bias in the reporting of sea monster accounts.

LiveScience: What does that bias tell us about the validity of those reports?

Paxton: It means we can probably be more doubtful about one potential explanation for sea monster reports. I expected that when I did the analysis, the reports would be far away. I thought people were reporting monsters because they'd seen familiar things at a distances. But the reported distances are much closer than you'd expect. It's not because these things are a vast distance away, or at least, if witnesses are misinterpreting things, it happens over short distances.

LiveScience: Are any of these historical reports actually plausible?

There's a report by two zoologists actually in the early part of the century published in the Journal of Zoology where they actually reported seeing a serpent-like animal in the South Atlantic. They describe an animal which doesn't quite fit into our current view. That's an intriguing one. [Read: The Creatures of Cryptozoology]

LiveScience: Okay, let's talk about an implausible report. Tell me about the case of the possible whale penis.

Paxton: That's a quite famous sea monster sighting from the 18th century, where people saw a sea monster en route to the Danish colony in Greenland. What they saw was an animal which they described as having a serpent-like tail. We suggested that there could be an alternative explanation and what they were interpreting as a tail could actually have been the penis of the animal.

If you do a search for "whale penis" on the Net, they've got pictures and they do look quite serpentine.

Paxton: I think that goes on, yes, but as yet I've got no quantitative evidence of that happening. I'm actually collecting data on that.

I think people make mistakes and it does mean that I'm a little more skeptical of laypeople who report strange things. When you see something in the water, there are lots and lots of large animals it could potentially be, and there's no one in the world who is an expert on all of these animals. Zoologists, when they see an animal, perhaps they'll be looking at the features which will tell them about its affinities, whereas laypeople won't necessarily do that.

LiveScience: Do you think there are likely large, undiscovered marine creatures out there?

The question isn't, "Are there large marine animals?" The question is, "Are they seen by laypeople prior to their discovery?" The answer to that is "Probably not."

Paxton: Logically, the animals we've not discovered yet are the ones that are difficult to detect, which means it would be very rare for people to encounter them anyway. We know there are biases in the reporting process, and we know that to have the potential to recognize an unknown animal, you need to have superb expertise. In terms of marine mammals, for example, I can only think of about 10 people in the world who if they saw a marine mammal would be in a position to say, "That's a marine mammal that we've never described."

LiveScience: Do you have a favorite sea monster?

Paxton: I quite like the sea monk [a creature with a monk's head and fish body], actually. The idea that there's a monk living in the sea, that's quite bizarre.

I quite like the Kraken as well. It's not what people say it is, actually. People often say that the Kraken is a mythologized giant squid. If you look at the early accounts of the Kraken, they're not like a giant squid at all. It's very similar to a monster which is a fish or whale so large that it sits for so long that trees grow on it. Sailors see it, they come onshore and make a fire, and it jumps to the bottom of the sea and drags the ship down. I think the Kraken is connected to that, because it describes it being like an island.

LiveScience: Is there anything else you want to add?

Paxton: You didn't ask me the one question everyone asks.

Paxton: Whether I believe in the Loch Ness Monster. For the record, I don't. I've only been to Loch Ness once, actually. I didn't see anything.