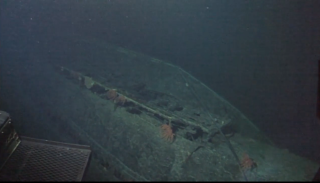 A World War II-era Japanese submarine that had been captured and intentionally sunk by U.S. forces was discovered earlier this year in its watery tomb. The massive submarine, lost underwater since 1946, was found off the coast of the Hawaiian island of Oahu.

Researchers at the Hawaii Undersea Research Laboratory (HURL), headquartered at the University of Hawaii at Manoa in Honolulu, located the missing I-400 submarine off Oahu's southwest coast, sitting more than 2,300 feet (700 meters) below sea level. The sub was found in August, but the researchers just announced their finding this week.

The I-400 was one of the Imperial Japanese Navy's Sen Toku-class submarines, which were the largest submarines ever built before the age of nuclear-powered subs. These massive vessels were longer than a football field, and were used as submarine aircraft carriers. The subs were capable of carrying up to three float-plane bombers underwater, but were designed to rise quickly to the surface, launch aircraft and then dive underwater again before enemies could detect them. [7 Technologies That Transformed Warfare]

The Japanese Navy intended to amass an entire fleet of Sen Toku-class submarines, but by the end of World War II, only three had been built.

"The I-400 had been on our 'to-find' list for some time," Terry Kerby, HURL's operations director and chief submarine pilot, said in a statement. "Finding it where we did was totally unexpected. All our research pointed to it being farther out to sea."

HURL researchers have been using manned submersibles to hunt for submarines and other sunken historical artifacts since 1992. The I-400 discovery resulted from a series of dives funded through a grant from the National Oceanic and Atmospheric Administration's Office of Exploration and Research and the University of Hawaii at Manoa's School of Ocean and Earth Science and Technology.

Kerby described his excitement when sonar instruments identified what appeared to be a massive underwater wreck. "It was a thrill when the view of a giant submarine appeared out of the darkness," he said.

Before the invention of Sen Toku-type vessels, submarines were used almost exclusively to sink surface ships and other submarines in stealth underwater attacks.

"The innovation of air strike capability from long-range submarines represented a tactical change in submarine doctrine," James Delgado, director of NOAA's Maritime Heritage Program in Washington, D.C., said in a statement. "The large I-400, with its extended range and ability to launch three M6A1 Seiran strike aircraft, was clearly an important step in the evolution of submarine design."

The mammoth I-400 submarines had a range of 37,500 miles (60,300 km), and could circumnavigate the globe one-and-a-half times without needing to refuel.

And while the submarines were built to carry planes to bomb the U.S. mainland, none ended up being used for their designed missions during the war, Delgado said. Still, the mega-subs were instrumental in shaping the future of submarine design, he added.

"The I-400 is technologically significant due to the design features associated with its large watertight hangar," Delgado said. "Following World War II, submarine experimentation and design changes would continue in this direction, eventually leading to ballistic missile launching capabilities for U.S. submarines at the advent of the nuclear era."

At the end of World War II, the U.S. Navy captured five Japanese submarines, including the newly discovered I-400.

The vessels were brought to Pearl Harbor for inspection, but were scuttled off the coast of Oahu in 1946, after the former Soviet Union demanded access to the submarines under the terms of the treaty that ended the war, according to HURL officials. The U.S. Navy intentionally sank the subs in order to keep knowledge of the advanced technology out of Soviet hands in the buildup to the Cold War.

HURL expeditions have since located four out of the five scuttled submarines. The I-400 was first located in August, but the finding was announced this week after NOAA reviewed details of the discovery with the U.S. State Department and officials from the Japanese government.

"These historic properties in the Hawaiian Islands recall the critical events and sacrifices of World War II in the Pacific, a period which greatly affected both Japan and the United States and shaped the Pacific region as we now know it," Hans Van Tilburg, maritime heritage coordinator for NOAA in the Pacific Islands region, said in a statement. "Our ability to interpret these unique weapons of the past and jointly understand our shared history is a mark of our progress from animosity to reconciliation. That is the most important lesson that the site of the I-400 can provide today."