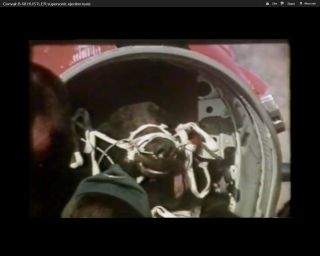 A bear is strapped into an ejection capsule during Cold War bomber tests.
(Image: © Screenshot of US Air Force film.)

The B-58 Hustler was the pride of the U.S. Air Force during the Cold War. The first bomber capable of hitting Mach 2 (twice the speed of sound), it was designed to drop nuclear weapons into the Soviet Union in the era before intercontinental missiles took over that task.

Approximating the size of an adult human male, American black bears and Himalayan bears were chosen to be strapped into the ejection capsules after being drugged with sedatives. The capsules were ejected at varying speeds and altitudes, and after parachuting down to Earth, the capsules were opened and the bears were examined, io9.com reports.

None of the animals died during the test, though there were some serious injuries, including muscle damage, internal hemorrhaging and broken bones including two pelvic fractures in one of the bears. A video outlining the Air Force testing program can be seen here, though parts of the video may be disturbing for some viewers.