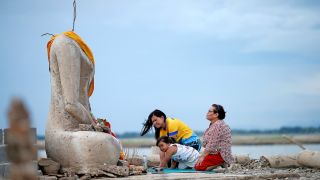 A family prays near the ruins of a headless Buddha statue that resurfaced in a dried-up dam because of a drought in Lopburi, Thailand, on Aug. 1, 2019.
(Image: © Soe Zeya Tun/Reuters/Newscom)

A long-lost underwater temple has reemerged in central Thailand, where extreme drought has all but dried up the region's reservoirs.

The temple and the village surrounding it were submerged by the construction of a dam 20 years ago. Now, thousands of tourists and pilgrims are flocking to the parched landscape to pay respect to the ruins. Visitors include monks adorning a large headless statue of Buddha with flowers, and former residents of the village who are returning to see the ruins of their old home.

Yotin Lopnikorn, who lived in the village as a child, recalled playing near the temple as a child. “When I was young, I always came to meet friends at the elephant sculptures in front of the main building to play there,” he told Reuters.

The buddhist temple, called Wat Nong Bua Yai, was once a hub of community in the surrounding villages, Reuters reports. There, locals participated in rituals and festivities, and used the space as a community hangout. Drought revealed the remains of Wat Nong Bua Yai once before, in 2015. But this year's drought is exceptional, according to the Thai Meteorological Department. The reservoir that had previously submerged the temple is nearly dry; it's at just 3% capacity. Other regions of Thailand aren't faring much better for water. Many other reservoirs are hovering between 20% and 40% of their capacity, the Japanese news agency Nikkei Asian Review reports. While it's the worst drought in over a decade for all of Thailand, according to the Thai Meteorological Department, some regions are facing the worst drought in 50 years. The Mekong River, which lies east of Thailand, along the border with Laos, is at its lowest level in almost 100 years.

All this is taking place during what should be the monsoon season — the wettest season of the year in Southeast Asia. As a result, rice farmers, who rely on reservoirs to flood their paddies, are suffering, Reuters Reports. In May, when rice planting normally takes place, the Thai government asked these farmers to hold off for rain. It came, but it was too little, too late. Since then, the Thai government has been seeding clouds -- releasing chemicals into the air that cause clouds to condense -- to generate some rain and allow farmers to continue planting.

Earlier this year, the United Nations Economic and Social Commission of Asia and the Pacific released a report on drought risks. “The area affected by drought is likely to shift and expand," the report stated. "There will be many more dry years ahead."