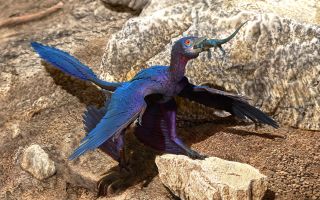 The last moments of a Cretaceous lizard may have looked like this, as it was swallowed head first by the dinosaur Microraptor zhaoianus.
(Image: © Doyle Trankina)

About 120 million years ago, a small dinosaur gulped down a lizard, swallowing the reptile whole. The wee lizard's story might have ended there, but the dinosaur died soon after and was preserved as a fossil. Millions of years later, paleontologists discovered the scaly meal in the dinosaur's belly.

Scientists found the lizard when they examined the fossil of a feathered dinosaur named Microraptor zhaoianus, a small carnivore from the early Cretaceous period (145.5 million to 65.5 million years ago) in what is now northeastern China. In Microraptor's abdomen was a near-complete skeleton that the researchers identified as a previously unknown lizard species.

This "exceptional specimen" paints a clearer picture of the animal diversity in this region during the Cretaceous, and it hints at what was on the menu for dinosaur predators like Microraptor, the scientists reported in a new study. [In Photos: Amber Preserves Cretaceous Lizards]

Microraptor belongs to the theropod (meat-eating) dinosaur group known as the dromaeosaurids — small to medium-size bird-like dinosaurs — which also includes Velociraptor and Deinonychus. It had flight feathers on its front and back limbs, and it could likely glide or even fly, according to the study.

The fossilized lizard's skeleton was still whole and nearly complete, and it appeared to belong to a juvenile. Its position inside the dinosaur's gut showed that it was gulped down head first, "consistent with feeding behavior in extant carnivorous lizards and birds," the study authors wrote.

They dubbed the ingested lizard Indrasaurus wangi: The species name honors paleontologist Yuan Wang, director of the Paleozoological Museum of China, and Indrasaurus refers to a legend from ancient Indian texts about the deity Indra, who was swallowed whole by a dragon.

Close examination of the lizard's teeth revealed that they were widely spaced, short-crowned and nearly square. They were unlike the teeth in other Cretaceous lizards, and their unusual shape suggests that the lizard may have had a diet that differed from that of its close relatives, the scientists said in the study.

Microraptor and its lizard lunch provide a rare glimpse of direct interactions between predators and prey in ecosystems that vanished millions of years ago. They were found alongside other Microraptor fossils that hold the remains of mammals, fish and birds in their bellies, according to the study.

Using these fossils and others from more than two dozen animal groups, the researchers reconstructed a food web showing who ate whom in the Jehol Biota; this site in Liaoning, China — where Microraptor was discovered in 2005 — holds a diverse array of exceptionally preserved fossils dating from 133 million to 120 million years ago.

The findings were published online July 11 in the journal Current Biology.