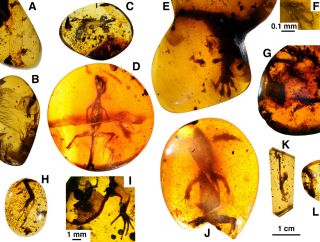 Amber-imprisoned lizards from Southeast Asia that date back 99 million years ago make up the oldest assemblage of tropical lizards ever found in amber, according to a new study.

The tiny, trapped fossils, found in Myanmar, represent an unparalleled sampling of species diversity for tropical lizards from the Cretaceous era, which lasted from 145.5 million years ago to about 65.5 million years ago. The fossils are astonishingly well-preserved, the researchers said, including specimens with intact skin, visible skin pigment and soft tissues — and in one case, a lolling tongue.

The study included remarkable close-up photographs of the lizards' scales, delicate claws and other unusually well-preserved features. One individual's spindly toes earned it the nickname "Nosferatu," after the long-fingered silent-movie vampire, said study co-author David Grimaldi, a curator in the division of invertebrate zoology at the American Museum of Natural History in New York. [In Photos: Amber Preserves Cretaceous Lizards]

But it was the specimen abundance and the variety of species that really impressed Grimaldi, he said. "Lizards are extremely rare in any amber deposit," Grimaldi told Live Science in an email. "I never expected to see so many specimens from a Cretaceous deposit, and such diversity."

Polished amber is a prized gemstone with a rich, yellow-orange hue, and has been collected by people since at least 13,000 years ago, according to an article published in Science in 2009.  But millions of years earlier, in its pre-fossilized form as sticky tree resin, the substance played a more sinister role in the Cretaceous landscape. It trapped hapless insects — sometimes in compromising positions — and other living creatures in its depths.

As the resin hardened over time to form amber, the tiny corpses imprisoned within were preserved in magnificent detail, frequently alongside environmental traces that can inform paleontologists about the ancient ecosystems that the animals inhabited.

In amber, "superb preservation allows far better interpretation of the remains than would be possible for specimens in rocks," Grimaldi said. [Video: 'Dragons in Amber' — 3D Scanned Cretaceous Lizards]

Even with some specimens in which body parts aren't preserved, the amber still holds imprints of the animal that can be imaged, said study co-author Ed Stanley, a postdoctoral researcher at the Florida Museum of Natural History. Using computed X-ray tomography (CT) scanning, the scientists were able to capture those regions, which were less dense than the surrounding amber, using them to create molds for reconstructing the original forms as 3D models.

A lounge of lizards

Juan D. Daza, the study's lead author and a biology professor at Sam Houston State University in Texas, told Live Science in an email that the lizards' body lengths — minus their tails — ranged from 0.4 inches (11 millimeters) to about 1.6 inches (40 mm). One partial specimen might have been at least 2.4 inches (60 mm) long.

Stanley told Live Science that he was amazed by how closely certain individual lizards resembled their modern kin. "If you showed me the CT scans we made, I'd say that was a species of modern gecko," he said. "Except when you start looking closer, you found a couple of characters that no gecko has today."

One of the preserved lizards in particular was "very interesting," Daza said. The tiniest of the specimens, presumably newly hatched, was described in the paper as a "stem chameleon," an early ancestral form in the chameleon lineage. The tiny creature lacked modern chameleons' specializations, like joined digits and compressed bodies, Daza said. But it had a curled tail and skull features that suggested it may have fed like modern chameleons, using its tongue to capture prey, he said. [Images: Amazing Dominican Amber Trove]

While getting trapped in resin didn't turn out so well for the little chameleon ancestor, the lizard's fate was an incredible stroke of luck for the scientists who scrutinized it nearly 100 million years later.

"The tiny, little specimen would never have been recognizable as a very primitive and close relative of living chameleons if preserved in rock. Minute but diagnostic characters simply would not have been preserved," Grimaldi told Live Science. "This specimen is scientifically the most significant find, since it expands the geological age of chameleons about five times," he said.

In fact, Stanley added, the superior preservation of all the fossils has far-reaching implications for understanding the tree of life for squamates, the group that contains lizards and snakes.

"Because these specimens are so old, and we can place them with such relative certainty, that acts as a really nice calibration point for when we're trying to date the entire radiation [diversification] of squamates," Stanley said. "And that's kind of cool, because that tells us about the conditions in the world when certain species were radiating, and could help predict what might cause divergences in the future."

The findings were published online today (March 4) in the journal Science Advances.