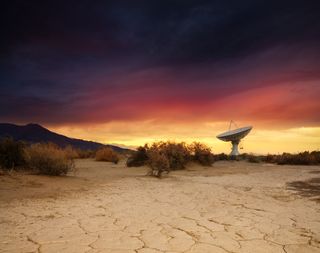 Known to locals as "the Big Ears," the Owens Valley Radio Observatory is located near Bishop, California
(Image: © Shutterstock)

Astronomers just pinpointed the source galaxy of another fast radio burst (FRB), suggesting that these brief and bizarre cosmic blasts may not remain mysterious for much longer.

The newfound explosion — known as FRB 190523 because it was spotted on May 23 of this year — was traced to a big galaxy about 7.9 billion light-years away from Earth, researchers announced in a study published online July 2 in the journal Nature.

The find brings the number of localized FRBs to three, out of about 85 total detected blasts. FRBs are so hard to track down because the vast majority of them are one-offs — millisecond-long bursts that never recur. Indeed, only two "repeaters" have been observed to date.

In 2017, astronomers managed to trace one of these rare repeaters, FRB 121102, to a dwarf galaxy about 3 billion light-years away.

And the first pinpointing of a one-off FRB was announced just last week: An Australian-led team determined that a newfound one, called FRB 180924, came from a big galaxy 3.6 billion light-years from Earth.

And now a second team has pulled off this difficult feat.

"Finding the locations of the one-off FRBs is challenging because it requires a radio telescope that can both discover these extremely short events and locate them with the resolving power of a mile-wide radio dish," Vikram Ravi, an assistant professor of astronomy at the California Institute of Technology (Caltech) in Pasadena, said in a statement.

Ravi, the lead author of the new Nature study, works with the radio telescopes at Caltech's Owens Valley Radio Observatory (OVRO), a facility in California east of the Sierra Nevada mountains.

"At OVRO, we built a new array of 10 4.5-meter dishes that collectively act like a mile-wide dish to cover an area on the sky the size of 150 full moons," Ravi added. "To do this, a powerful digital system ingests and processes an amount of data equivalent to a DVD every second."

This "OVRO-10" network detected FRB 190523. Ravi and his colleagues traced the burst to its host galaxy using data from the radio telescopes and the Keck Observatory in Hawaii.

The two new localizations show that FRBs can originate in a diversity of environments — big galaxies in addition to dwarfs, for example. And the recent discoveries cast doubt on a favored theory of FRB generation, or at least suggest that it doesn't tell the full story, researchers said.

That idea posits that FRBs are produced by supermagnetic neutron stars known as magnetars.

"The theory that FRBs come from magnetars was developed in part because the earlier FRB 121102 came from an active star-forming environment, where young magnetars can be formed in the supernovae of massive stars," Ravi said. "But the host galaxy of FRB 190523 is more mellow in comparison."

More data will be needed to crack the FRB puzzle. And much more should be rolling in soon, now that astronomers know how to track down the tricky one-off bursts, astronomers said.

For example, OVRO-10 is a pathfinder for a larger system called the Deep Synoptic Array, which will consist of 110 dishes when it comes online in 2021.

"With the full Deep Synoptic Array, we are going to find and localize FRBs every few days," study co-author Gregg Hallinan, the OVRO director and a professor of astronomy at Caltech, said in the same statement. "This is an exciting time for FRB discoveries."