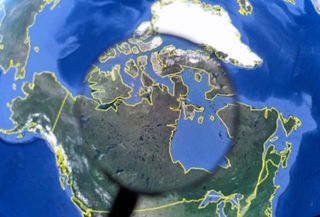 Google Earth is an interactive map that allows users to see all over the world.
(Image: © Shutterstock)

Google Earth is a unique geomapping and tagging program that uses composite imagery to form a comprehensive, interactive map of the Earth. By stitching together more than a billion satellite and aerial images, the application provides a versatile tool that allows individuals and groups to track climate change, discover unknown geographic and ecological features, and record our history.

This digital cartography tool continues to be a useful resource for governments, private organizations and individuals who want to track and tag geographic data to myriad ends. By collecting and curating enormous amounts of data, Google has made it possible for conservationists to observe the shifting patterns of flora and fauna on a global scale, for governments to observe the growth of cities worldwide, and for individuals to tell their personal stories in a unique way.

The underlying technology for Google Earth was originally developed by Intrinsic Graphics, a gaming company that built visual databases. In 2004, Google purchased Keyhole Inc., a spin-off of Intrinsic, which eventually became Niantic, the Google subsidiary responsible for "Pokemon Go."

Launched in 2005, Google Earth was the first widely available, interactive composite map of our world. In 2015, the development team started planning a revamped version that focused on accessibility and availability. Unveiled in 2017, the new app is now available via Google's Chrome browser and by downloading their standalone app. Google Earth features 3D reconstructions, annotation tools and satellite imagery provided by NASA dating back all the way back to 1984, allowing users to virtually travel back in time. As new images become available via satellite and aerial imagery, the map is constantly updated to reflect our ever-changing world.

The imagery and data used by Google Earth is collected through partnerships with NASA, National Geographic and others, making it quite a collective effort. According to Gopal Shah, Google Earth's product manager, the development team consists of four to five user experience designers, and around 30 engineers who are mostly focused on improving the app's ability to send data. "Even if you're a kid in rural India on a 2G network, we want you to be able to access Google Earth in a meaningful way," Shah told Live Science.

How are the images made?

Google Earth digitally stitches together billions of images taken by satellite and aerial photography, using the highest quality pixels from each photograph to create the clearest view of any portion of the Earth.

"When you open Google Earth for the first time, that image is composed of trillions of pixels from NASA satellite photos," Shah said. "When you see that image, it's showing you springtime on every area of the planet. We call it 'Pretty Earth.'"

Many areas also have also been rendered in 3D, created from thousands of aerial photos of the same place from different angles. To gather these pictures, a plane flies overhead in a tight pattern, "like mowing a lawn in the sky," Shah said. A complex algorithm then models the landscape and creates a 3D view that users can interact with.

How Google Earth is used

For most people, Google Earth is a novel way to explore cities and landscapes from above, allowing us to view our world within the greater context of itself.How Google Earth is used

"Probably around 99% of first-time users visit their neighborhood first," Shah said. Using NASA's satellite imagery, you can view a timelapse of the changes and growth in your corner of the world over the last 30 years. [7 Amazing Places to Visit with Google Street View]

Saroo Brierley, an orphan from India who was raised in Australia, was able to reconnect with his birth family after being separated for 25 years, by following geographic markers on Google Earth. He detailed these experiences in his book "A Long Way Home" (Viking Australia, 2013), which was adapted into the feature film "Lion" in 2016. New features have provided conservation groups and researchers with the tools to keep track of our changing world. "One of our new features—Earth Engine—has allowed researchers to visualize global deforestation patterns, map waterway changes, and discover as-yet-unknown areas all over the world," Shah said.

News organizations also make extensive use of Google Earth via the Earth Studio function, which allows people to export video. "Any time you see a major news network zooming in and out of a region to show context, that's Earth Studio," Shah said. Allowing people to better understand current events in a geospatial context improves our ability to recognize the issues of our day in a more holistic way.

"One of the most direct and positive results we've seen is from Indonesia," Shah said. "A conservation group was able to view illegally fished and overfished areas off the Indonesian coast, and the government there has stepped up enforcement and implemented policy to maintain a healthy coastline." Another conservation group has also discovered an "uncharted, untouched rainforest atop a plateau in Mozambique," Shah said. "They've been able to take steps to ensure that the location of this forest remains hidden, and that its integrity remains preserved." Shah also described a new feature that makes climate change modelling accessible to anyone. "If you want to see how coastlines and geographic features change when global temperatures rise, you can do that."

Educational tools are one of the biggest areas of focus for the Google Earth team right now. The new Voyager feature (not to be confused with the NASA probe), allows for geotagged annotations, stories and videos to appear within Google Earth, giving geographic and cultural context to people's stories. "Voyager can best be described as a magazine for Google Earth," Shah said.

Google has partnered with "Sesame Street," "Carmen Sandiego" and National Geographic to develop interactive games, tours and stories to help people get a better perspective of our world.

"Each region of the world has its own unique 'Sesame Street' characters," Shah explained. Now, kids are able to be taken on guided cultural tours of different regions across the world, led by that place's special 'Sesame Street' guide." Additionally, people have been using Voyager to tell their own stories. By annotating areas where their own life events have taken place, individuals are able to record their personal histories, to share with others and preserve for posterity.