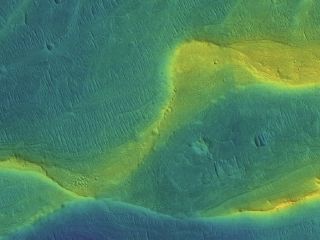 This NASA image shows a preserved river channel on Mars, with color overlaid to indicate elevation (blue is low, yellow is high). The range of elevation in the snapshot is about 115 feet (35 meters).
(Image: © NASA/JPL/Univ. Arizona/UChicago)

Mars was wet, until suddenly it wasn't.

Scientists have long seen dry riverbeds slashed across the surface of Mars as evidence that water once flowed freely on the planet. And in 2012, NASA's Curiosity space rover sent back images of smooth, round pebbles from the bottom of one such riverbed, their lack of rough edges evidence that water had once flowed over them. Now, a new study published today (March 27) in the journal Science Advances catalogs those rivers and reports that their waters likely flowed heavily well into the last epoch, before Mars entirely dried up.

"It's already hard to explain rivers or lakes based on the information we have," Edwin Kite, a planetary scientist at the University of Chicago and lead author of the study, said in a statement. "This makes a difficult problem even more difficult." [7 Most Mars-Like Places on Earth]

If the rivers had been brief or flowed only part of the time, it still would have been challenging to explain their existence. But scientists just don't know where all the liquid water came from to form these heavy flows.

Mars today is frigid and mostly dry, with just a thin atmosphere on its surface. In the distant past, it seems that the weather should have been even colder, because the sunlight reaching the planet's surface would have been dimmer. And yet, billions of years ago, water seems to have flowed heavily and freely across Mars, in rivers that were sometimes wider than those on Earth. These waters appear to have flowed so heavily that they would have been in motion all day, not just at peak sunlight hours or in thin trickles.

Scientists just don't know what sort of weather on the Red Planet would have produced these rivers, but the study showed that the heavily flowing water existed for more than a billion years, in early Martian history.

That implies, at a minimum, that Mars had a strong greenhouse effect back then to trap the energy of limited sunlight on the planet and melt its water — which then ran off into river channels. ['4-Billion-Year Old' Mars Fly-Over Shows Water and Blue Skies | Video]

Kite said that this work implies that something in the current science of planets and the early solar system is wrong, because everything scientists know suggests that the rivers on Mars should have been small and temporary, if they existed at all. The long-term, heavy flows lasting for millions of years, just don't fit into current scientific knowledge.

The research also shows that as the Red Planet got colder, it didn't slowly dry up. Instead, at the end of the Martian wet epoch, rivers became shorter, but still carried heavy runoff before — almost immediately — disappearing.