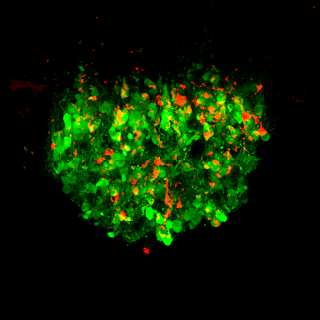 "Thirst neurons" light up in the subfornical organ of the brain.
(Image: © Knight lab/UCSF)

That first drop of ice-cold water after a run in the scalding sun can be deliciously inviting. A glass of water after downing four others, however, probably isn't.

Those varied responses occur thanks to the brain, which makes sure we don't drink too much or too little water — two scenarios that would throw the body into dangerous territory.

But how does the brain know when to encourage you to stop or start drinking?

A new study conducted in mice suggests that a mysterious element in the gut may play a role by predicting how much you need to drink to satisfy the body. It then promptly notifies the brain, which, in turn, decides how thirsty to make you, a group of researchers reported today (March 26) in the journal Nature.

In 2016, a group of researchers at the University of California, San Francisco (UCSF) found that when mice drink liquids, it prompts the mouth and throat to send signals to the brain, which shuts down the brain cells that dictate thirst. These "thirst cells" are found in a region called the hypothalamus, which regulates thirst, blood pressure and other bodily processes, and also in a small neighboring spot called the subfornical organ. [10 Things We Learned About the Brain in 2018]

The mouth and throat begin firing these signals within a few seconds of drinking something, although it typically takes from about 10 minutes to an hour for that water to actually enter the bloodstream and be circulated to thirsty cells throughout the body. So the brain needs to strike a balance — if it turns off the signals too fast, you won't get enough to drink.

"Somehow, the brain has a way to match these two different timescales so that you can very rapidly drink just the right amount of water to satisfy your body's needs," said study author Zachary Knight, an associate professor of physiology at UCSF and a Howard Hughes Medical Institute investigator.

How the brain does so was the question the researchers' study sought to answer.

In the new study, Knight and his team implanted optical fibers and lenses near the hypothalamus of mouse brains, which allowed them to watch and measure when those thirst neurons turn on and off. [13 Tips for Staying Hydrated in the Summer Heat]

When they gave the mice salt water, the scientists found that the thirst neurons stopped firing almost immediately, as expected. But a minute or so later, those neurons switched back on.

The throat and mouth fire signals to the brain to begin quenching thirst no matter the type of liquid. But because salty liquids can dehydrate the body, the "on" signal likely came from somewhere else, after the throat and mouth turned the thirst neurons "off."

Following a hunch that these neurons might be getting the other signals from the gut, the researchers directly infused water — both salty and fresh — into the mice's stomachs, avoiding the mouth and throat signals all together.

They found that fresh water also made the neurons stop firing, but salt water didn't. What's more, when salt-water infused mice were given fresh water to drink, those thirst neurons first, as expected, switched off — but then quickly switched back on.

The results suggest that there are molecules in the gut that sense the salt content in liquids and use it to predict how much a drink will hydrate the body. This system, which only seemed to work when the mice were truly dehydrated, sends this information along to the brain within a single minute, and the thirst neurons twinkle on and off.

And sodium isn't the only compound that would set off the gut molecules, Knight told Live Science. "Anything that would change the osmolarity of the blood is detected by this system." (Osmolarity refers to how concentrated a liquid is.)

The control of thirst

The findings, if confirmed in humans, could benefit a range of people.

For example, Knight noted that our ability to regulate thirst decreases with age. "So [elderly people] fail to stay properly hydrated, and that can cause medical problems — especially, for example, during times of intense heat," he said.

The opposite can also hold true: " A large proportion of marathon runners tend to over-hydrate during a race," said Charles Bourque, a neuroscientist at McGill University in Canada, who was not a part of the study. "The reasons for this are not clear, but a weakening of this gut-to-brain signal might play a role."

In any case, the study "significantly advances what we know about the control of thirst," Dr. Bourque told Live Science. And because the results are consistent with data obtained from brain scans in humans, at least some of the findings are likely applicable to humans, he added.

Though mice and humans obviously differ in some brain structures, their hypothalami are very similar, Knight said.

The team also found that the thirst signals traveled along the main signal highway between the brain and the gut: the vagus nerve. When the researchers cut out this nerve in a later experiment, the thirst neurons didn't turn back on when the mice started drinking.

Though they don't know for sure, the team thinks that the signals are coming specifically from the small intestine, which is the spot that connects most strongly to the vagus nerve and is also in the "correct" timespot in the digestive process to activate those thirst nerves a minute or so after drinking water.

For their next project, the team hopes to figure out the origin of the signal.