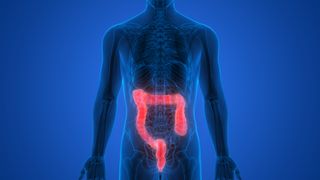 Mammals are thought to have a "second brain" or "gut brain" in their colons. A new study provides evidence of the gut brain's smarts.
(Image: © Shutterstock )

OK, not a literal brain — more of an autonomous matrix of millions of neurons that can, somehow, control intestinal muscle movements without any help from your central nervous system. And these neurons don't actually live in your butt, but they do live in your colon, or large intestine — that tube-like organ that connects the small intestine to the rectum and shepherds what remains of the food you ate through the final leg of the digestive tract.

Scientists call this site of colon intelligence your enteric nervous system, and because it can function without instructions from the brain or spine, some scientists like to call it your "second brain." How smart is this autonomous, intestinal brain? Scientists don't know for sure yet. But according to a new study in mice, published May 29 in the journal JNeurosci, the answer might be pretty smart for an intestine.

"The enteric nervous system (ENS) contains millions of neurons essential for organization of behavior of the intestine," wrote the team of researchers from Australia who observed the so-called second brain hard at work using a combination of high-precision neuronal imaging techniques.

When the researchers stimulated isolated mouse colons with mild electric shocks, they saw "a novel pattern of rhythmic coordinated neuronal firing" that corresponded directly to muscle movements in nearby sections of the large intestine.

These rhythmic, synchronized blasts of neuron activity likely help to stimulate specific sections of intestinal muscles at a standard rate, the researchers wrote. This ensures that colonic muscle contractions — also known as "colonic migrating motor complexes" — keep fecal matter moving in the right direction (out of the body, that is), and at a steady pace.

"This revealed that activity in the ENS can temporally coordinate [muscle] activity over significant distances along the length of [the] colon," the team wrote.

According to the researchers, similar synchronized neuron routines are also common in the early stages of brain development. This could mean that the pattern they identified in the colon is a "primordial property" held over from the early stages of the enteric nervous system's evolution.

But it could be even more important than that: Because some scientists hypothesize the enteric nervous system actually evolved before the central nervous system, the neuron firing pattern in your colon might represent the earliest functioning brain in your body. Yes, that would mean the brain in your butt could actually be your "first brain," not your "second brain." If this is true, you could say mammalian brains evolved first to move poop, and then to take care of more complex business.

However, this is the first time such a neuron-firing pattern has ever been detected in the colon, and so far, it's been found only in mice. The researchers are confident that their findings could apply to other mammals, too. But a clearer understanding of the enteric nervous system's power in humans will require further study — and lots of serious thinking from both brains.