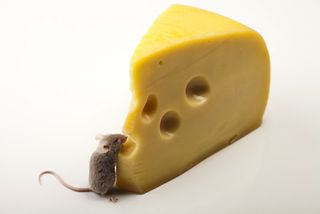 When a particular circuit in the brain is stimulated, it causes mice to voraciously gorge on food even though they are well fed, and deactivating this circuit keeps starving mice from eating, a new study shows.

The findings suggest that a breakdown within this neural network could contribute to unhealthy eating behaviors, the researchers said, although more work is needed to see whether the findings are also true of people.

The circuit lies in a brain area called the "bed nucleus of the stria terminalis" (BNST), and affects eating by inhibiting activity in another region, called the lateral hypothalamus, which is known to control eating, according to the study, published today (Sept. 26) in the journal Science.

"Normally, there's a population of neurons in the lateral hypothalamus that's putting the brakes on eating," said study researcher Garret Stuber, a neuroscientist at the University of North Carolina at Chapel Hill. "But when you shut those cells down by stimulating this pathway, that releases the brake, and the animal starts to eat."

"Nobody had a good mechanistic explanation for what's actually being stimulated or activated within this brain structure," Stuber said.

In the new study, the researchers focused on examining how the BNST influences activity in the lateral hypothalamus.

To manipulate the BNST neurons, the researchers used a technique called optogenetics that allowed them to activate specific neurons using light. They found that, upon activation, BNST neurons suppressed activity in the lateral hypothalamus, and caused the well-fed mice to immediately start eating.

"When we stimulate the pathway, the animals eat a third to 50 percent of the calories they eat in a normal day, in about 20 minutes," Stuber said. For a person, that would probably be the equivalent of eating lunch and dinner in one sitting, he said. [7 Foods You Can Overdose On]

What's more, the researchers gave the animals a choice in some of the experiments between regular food and a tasty food with a high fat content, analogous to junk food. They found that when they activated the circuit, the animals showed a strong preference for the junk food.

Conversely, deactivating the circuit caused the animals to immediately stop eating, even if their stomachs were empty.

The BNST is thought to be a hub that integrates emotionally relevant information coming from several parts of the brain. Although the experiments didn't aim to study the link between emotional states and feeding behavior, the findings may explain how emotions can influence eating, Stuber said.

"BNST is really important for affective behavior state in response to emotionally relevant stimuli, and the results show the output of those cells can actually directly modulate feeding behavior," he said.

Identifying a neural circuit that controls feeding, and understanding how the cells in this circuit work, could lead to future treatments for such conditions as obesity, the researchers said.

"Now that we know this is a critical circuit for feeding, we can start looking at this in humans," Stuber said.