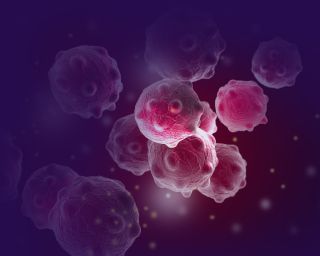 Scientists at an Israeli biotech company say that they believe they will have a cure for cancer within a year, but experts contacted by Live Science say that's highly unlikely.

The scientists, from Accelerated Evolution Biotechnologies Ltd. (AEBi), told The Jerusalem Post on Jan. 28 that they "believe [they] will offer, in a year's time, a complete cure for cancer." But AEBi has not published its findings; instead, the public learned of the claims in the Jerusalem Post article.

According to the Post, the potential treatment is called "MuTaTo," or "multitarget toxin." MuTaTo consists of peptides (short strands of amino acids) developed by the scientists that latch onto multiple sites on a cancer cell at once, according to the Post. By binding to multiple sites on a cancer cell, the treatment doesn't give the cell enough time to mutate again before another peptide in the same mix, this one toxic to cancer cells, swoops in and eradicates the cancer, the scientists claimed. [7 Odd Things That Raise Your Risk for Cancer (and 1 That Doesn't)]

The researchers said they have tested their approach in mice in a single exploratory study (but their results are supposedly "consistent and repeatable"), and they hope to begin human clinical trials soon, according to the Post.

The claims left other scientists scratching their heads.

"No data to review"

Dr. Deanna Attai, an assistant clinical professor in the department of surgery at the University of California, Los Angeles, said that she thinks the Israeli scientists are "making a lot of leaps from what sounds like very preliminary studies." As such, their claims are just "irresponsible," Attai told Live Science.

"There is no data to review," said Dr. Robert Maki, the chief scientific officer for the Northwell Health Cancer Institute in New York. "There's absolutely nothing to be able to look at or examine or read to know what the story is about actually."

Adding to outside experts' concern is that the study was conducted only in mice.

"As experience has taught us so many times, the gap from a successful mouse experiment to [an] effective, beneficial application of exciting laboratory concepts to helping cancer patients at the bedside is in fact a long and treacherous journey, filled with unforeseen and unanticipated obstacles," wrote Dr. Len Lichtenfeld, the chief medical officer of the American Cancer Society, in a blog post responding to the Jerusalem Post story.

"Unfortunately, we must be aware that this is far from proven as an effective treatment for people with cancer, let alone a cure," Lichtenfeld wrote.

"It's not that simple"

Live Science reached out to AEBi for comment. The company replied via email, saying that "We believe that we will offer in a year's time [when the first person will be treated] a complete cure for cancer." In addition, AEBi said that this cure will be effective from the first day and that the treatment will last a few weeks with no or few side effects, on the order of a "rush" or "less than a headache." The company also said the treatment would cost less than the cancer treatments available today. [7 Side Effects of Cancer Treatment, and How to Cope with Them]

But the claim that one treatment can cure all cancers doesn't seem too likely, Attai said. Cancer cells express different kinds of proteins on their surfaces, so they look different to drugs and the immune system. AEBi's treatment seems to be attacking multiple proteins on cancer cells, which perhaps may be a "promising" approach initially, she said. But past studies have shown that even if we set up a "roadblock ... cancer cells kind of find a way around it," she added.

Maki agreed: "It would be pretty unusual" for there to be one cure for all cancers. Cancer is different "from one person to the next or even within one person." Even some parts of a single tumor can be different than other parts, he added.

None of this is to say that researchers around the world wouldn't be happy if AEBi's treatment worked.

"We all want a cure — physicians, patients, everybody wants the cure," Attai said. "Unfortunately, it's just not all that simple."