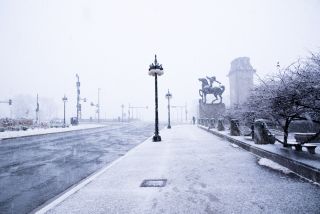 A photo shows the cold streets of Chicago during a previous cold snap.
(Image: © Shutterstock)

It might be cold enough in Chicago right now to make the ground shake.

Local news station WGN reported today (Jan. 30) that its viewers had heard "frost quakes" in the city overnight. And though the reports in Chicago are still unconfirmed, frost quakes are indeed a real thing.

Frost quakes, or "cryoseisms," occur when water trapped underground freezes suddenly as the temperature drops, causing it to expand. (Water expands as it freezes.) All that rapidly expanding water underground can split rocks and put stress on the soil, causing loud booms. Frost quakes are fairly rare events and difficult to positively identify. A huge blast that shook northwest Calgary, Canada, in 2014 was widely attributed to a loud cryoseism, but researchers never confirmed that as the cause. [9 Tips for Exercising in Winter Weather]

Charles Mott, a meteorologist at the National Weather Service (NWS) office serving Chicago, told Live Science he hasn't personally heard any frost quakes in recent days, but added "that has to do with being inside all day."

But Mott said that there's been some chatter about the possibility of them around the office, and that he has no reason to doubt WGN's report.

For a frost quake to occur, at least three conditions are required, according to "Frost Quakes: Forecasting the Unanticipated Clatter," published online in 2015 in the meteorology journal Weatherwise. First, rain or snowmelt saturates the ground with water. Second, there's little to no snow on the ground, which otherwise blankets the soil and protects it from sudden temperature changes. Third, the temperature rapidly drops, freezing the earth.

There's some evidence that frost quakes have become more common recently, at least in the Toronto area. The authors of "Forecasting the Unanticipated Clatter" published a different paper online in June 2016 suggesting that this increase might be the result of the changing climate. Warmer, wetter air masses have become more common in the area over the winter, leaving the ground wet and free of snow. When those air masses do turn frigid, frost quakes can result.

It's unclear if frost quakes are occurring elsewhere in areas impacted by the current polar vortex event. But meteorologists in the Grand Forks, North Dakota, NWS office laughed when contacted by Live Science with the question and said they'd never heard the term "frost quake" before.

("Cryoseisms" rang a bell, one forecaster said, but he was unsure of the details and would "have to google it, just like you.")

Brent Hewett, a meteorologist at the NWS office in the Twin Cities region of Minnesota, said that there had been no reports of cryoseisms in that area, probably because there's snow on the ground.