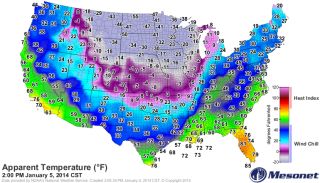 A blast of Arctic air pushing south as far as Atlanta has caused air temperatures across the United States to plunge, creating a massive 140-degree Fahrenheit (77 degrees Celsius) temperature difference between the chilly Dakotas and balmy Florida yesterday (Jan. 5).

The pulse of frigid air, called a polar vortex, whirled into the United States this weekend on the heels of a major winter storm. But unlike that storm, the polar vortex won't bring heavy snowfall. (The snowstorm dropped nearly 2 feet, or 60 centimeters, of snow in Boston last week.) Instead, the National Weather Service is forecasting dangerous cold and windchills. The cold temperatures are expected to last through Wednesday, the NWS forecasts.

The polar vortex is a low-pressure system that circulates from west to east in the Arctic during winter. Late last week, a high-pressure system — called an atmospheric block — situated over northeastern Canada and Greenland stopped this circulation pattern, pushing the cold air into the United States. On Sunday afternoon, temperatures ranged from minus 55 F to 85 F (minus 48 C to 29 C), according to NWS weather data.