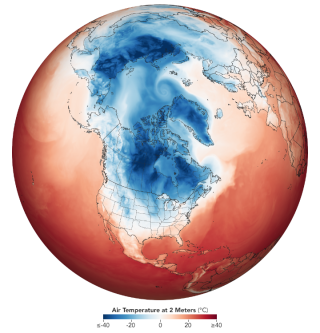 A map from NASA's Earth Observatory shows the southward spread of cold air from the arctic on Jan. 29.
(Image: © NASA)

As Live Science reported (and all your Chicago friends on Instagram confirmed), it's very cold in the Midwest and Plains right now. That's not just because it's winter, which is always pretty cold out there, but also because a big chunk of Arctic air (the polar vortex) has become trapped in the North American midlatitudes.

Here's the weird thing, though: Cold as it is out there, and cold as it will soon be on the East Coast, the West Coast is doing just fine. Portland, Oregon, is about 250 miles (400 kilometers) farther north than Chicago, where, as of this writing, it's minus 15 degrees Fahrenheit (minus 26 Celsius). But Portland is a comparatively balmy 47 F (8 C). Seattle is nearly 400 miles (640 km) farther north than Chicago, but that West Coast city is currently 45 F (7 C).

Now, there are a number of reasons pertaining to air currents and other factors that make the Pacific Northwest generally much more comfortable temperature-wise than the Midwest. For one, that region is often spared contact with that huge mass of Arctic air — as is the case on this occasion. [9 Tips for Exercising in Winter Weather]

A big, granite reason for that difference is the Rocky Mountains, according to Tyler Hasenstein, a meteorologist at the National Weather Service Forecast Office in Minnesota's Twin Cities region. The continent-splitting mountain chain forms a kind of buffer in the jet stream, an air current that, among other things, plays a big role in movements of the polar vortex. And the effect is to keep the polar vortex at bay. (Usually, this splat of counterclockwise-spinning Arctic air stays caged up around the North Pole, but right now, a disruption in the system is sending the blast into the U.S.)

"It's just the nature of the way the jet stream is positioned during a typical winter," he said. "The mountains disrupt the jet stream already, and meanwhile, over toward the upper Great Lakes, Minnesota, the Dakotas, it's much flatter."

The interacting landforms and air currents usually shunt southward-bound blasts of Arctic air to the east of the mountains, leaving the western side mostly at peace, he said.

But America's big middle (and the Canadian provinces to the north) aren't the only regions of the world that see these sorts of effects.

"It does happen quite a bit over the Russian Siberia region, into Mongolia and parts of northern China," he said. "And that's kind of the same thing: You get away from areas of elevation toward where it's a little bit more flat, and away from the oceans, and that's where the effect is more pronounced."

So, Midwesterners, take heart: You've got comrades in this frigid struggle. They're just in Siberia at the moment.