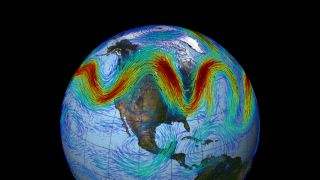 This winter's wild weather got its start 4,000 years ago, a new study finds.

The roaring jet stream, whose swooping winds drove frigid cold in the East and record warmth in the West this winter, first started twisting and turning about 4,000 years ago, according to a new analysis of ancient rainfall records from North America. Jet stream winds race from west to east, and kinks in the narrow atmospheric current can suck Arctic cold south or hold warm air in place.

The study shows the jet stream's plunging pattern is a long-standing natural phenomenon. However, the findings also suggest that global warming may boost the frequency or intensity of the curves, which would mean more winter extremes in the United States and Canada, the researchers said. The study was published today (April 16) in the journal Nature Communications.

"The pattern we've observed points to a strong potential for an increase in winter extremes in the future," said Gabe Bowen, a study co-author and paleoclimatologist at the University of Utah.

Bowen and his co-authors examined the 8,000-year history of a weather pattern called the Pacific-North America Teleconnection. The teleconnection refers to blobs of high and low atmospheric pressure above the Pacific Ocean and North America that direct the jet stream's strength and location.

Lead study author Zhongfang Liu, now at the Tianjin Key Laboratory in China, tracked the jet stream's location for the past 8,000 years with oxygen isotopes (atoms of the same element with different numbers of neutrons) from caves and lake sediments. The ratio of certain oxygen isotopes reveals the history of rainwater, such as how cold the air was when the water fell and where the water came from. Looking at the rainwater's history helps trace the pattern of the jet stream, which drives storms across the continent. The team also compared their rainfall records with tree ring records and more recent instrumental data.

The rainfall patterns reveal the jet stream was relatively "flat," moving straight and steady from about 8,000 to 4,000 years ago, the study reports. Then, about 4,000 years ago, the amount of solar energy reaching the Northern Hemisphere dropped. (This drop was caused by Earth's 20,000-year precession, the slow change in its rotation axis.) The change in the sun's energy altered worldwide climate, such as triggering a stronger El Niño/La Niña cycle and a shift in monsoonal rainfall over India and Pakistan. [10 Surprising Ways Weather Has Changed History]

The jet stream pattern also shifted 4,000 years ago, going from flat to curvy over a period of about 500 years, the researchers found. For example, the isotopes show more Arctic air moving south in the East, and more tropical air heading north in the West, consistent with wrinkles in the jet stream. The curves help explain why some parts of North America became colder or wetter, while others grew drier or warmer, Bowen said.

"We knew the changing seasonality of the climate in North America wasn't uniform, and we were able to link it to this change in the jet stream," Bowen said.

So was this winter's bizarre weather the result of natural climate swings? Not at all, Bowen said.

"All things being equal, with the solar forcing that kicked in 4,000 years ago, we'd actually expect to be heading the other way now and starting to decrease the jet stream curviness," Bowen told Live Science.

"Whether the Pacific-North America Teleconnection will continue to vary in the future as it has for the past few thousand years will have important implications in terms of water availability and climate in the western United States," said Max Berkelhammer, a hydrologist at the University of Illinois, Chicago, who was not involved in the study.

But until now, only a century of instrumental records have been available to model the jet stream's response to global warming. The new study "gives us a good look at natural variability so that we can gain a better understanding about how the jet stream has responded to past changes," said Lesleigh Anderson, a research geologist with the U.S. Geological Survey who was not involved in the study "This is what we need to know to better understand what could happen in the future with rising carbon dioxide."