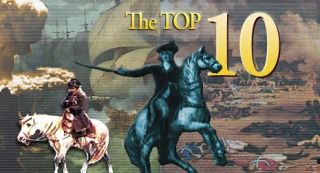 Extreme weather can do more than wreak havoc on homeowners and coastal regions alike. Throughout history, fierce winds, raging monsoons and other weird weather have changed the tides of entire civilizations. From sealing Hiroshima's fate and the demise of Napoleon's army (and horses) to hurrying the onset of the French Revolution and even defeating the leader of a Mongol Empire, here are 10 ways weather has changed history.

It was fine summer weather on Aug. 6, 1945, in Hiroshima. At 7:09 that morning, a weather reconnaissance plane passed overhead and radioed back: "Cloud cover less than three-tenths. Advice: bomb primary."

That is, the sky was clear enough to drop the first nuclear weapon used in war. The lack of cloud cover sealed Hiroshima's fate, and spared the back-up target.

Even more dramatic was the effect of cloud cover on Kokura. On Aug. 8, the second nuclear weapon was loaded into a B-29 called Bock's Car. But the skies were overcast over the primary target, Kokura. Instead, the bomb was released over the backup target: Nagasaki.

Adolf Hitler, apparently not much of a student of history, decided to repeat Napoleon's attack on Moscow, and did so all too well. In September 1941, operation Typhoon (one of many military operations named for extreme weather) swept into the Soviet Union. The German army was so confident it would win against Stalin's troops that several units brought dress uniforms along for the victory march in Red Square.

What they didn't bring along, however, was winter clothing. Hitler's meteorologically assisted defeats in the Soviet Union, outside Moscow and in Stalingrad, were turning points in the war.

In 1812, Napoleon assembled the largest army Europe had ever seen — more than 600,000 strong. His plan was to march boldly into Russia. He was not at all worried that winter was approaching. Napoleon's confidence appeared well-founded when his soldiers captured Moscow. They pillaged the city and stole jewels and furs as war prizes, to present to their wives back home.

Then the one thing that Napoleon had failed to consider became abundantly clear. Russia can get very, very cold. As Napoleon's army marched away from the ruined city with their spoils, temperatures fell to minus 40 degrees C. The soldiers fell to frostbite and starvation. In one 24-hour period, 50,000 horses died from the cold. The men wrapped up in their wives' war prizes, but to no avail. Of the 600,000 men who marched into Russia, only 150,000 would limp home. It was the beginning of the end for Napoleon's empire, and heralded the emergence of Russia as a power in Europe.

A Slave Revolt Washed Away

Aug. 30, 1800, might have been remembered as the day that thousands of slaves in Richmond, Va., followed a man named Gabriel and rose up against their masters, took the city armory and freed all the slaves. Instead, a violent rainstorm kept the conspirators from gathering long enough for word of the plot to get out.

Hail Storms Speed the Onset of the French Revolution

In a country already suffering from an economic crisis because of debt it incurred helping the American colonists in their war against England, a spring drought was causing food prices to skyrocket when a final blow came in the form of a hailstorm, which destroyed crops and laid waste to farms in France. The hungry populace was ready for extreme change, and the French Revolution soon followed.

Washington Lives to Fight Another Day

When George Washington became commander of the American army, it consisted of volunteers without uniforms and often without weapons. The British army, by contrast, was a well-equipped fighting force. General Washington could well have been defeated at the Battle of Long Island on Aug. 22, 1776, and we'd be drinking tea and eating crumpets today.

Fortunately for U.S. history, a thick fog allowed the colonial forces to retreat unseen and to fight another day.

In 1709, Swedish king Charles XII became the first great European invader to lead his men on a long march of death and exhaustion through the Russian winter. The winter attrition of the mighty Swedish forces during "the Great Northern War" had a great psychological impact and put the world on notice that Czar Peter I was a force to be reckoned with.

The defeat of the Spanish Armada in 1588 has been called one of the most decisive battles in Western civilization. Philip II of Spain sailed on the Protestant England of his sister-in-law Elizabeth I, but the wind did not cooperate with his ambitions.

In the 13th century, Kublai Khan, leader of the Mongol Empire, set his sites on the conquest of Japan, but was defeated by not one, but two monsoons. Shinto priests, who believed the storms were the result of prayer, called them kamikaze or "divine wind."

The survival of Greek culture, and consequently of Western Culture itself hung in the balance during the Greco-Persian Wars. The Persian Empire, at the peak of its strength, was poised to overrun mainland Greece itself. The Greek naval commander Themistocles was able to turn the tides of war at the battle of Salamis in 480 B.C. by using his knowledge of the winds.