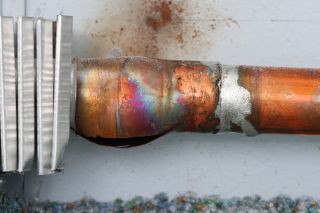 Bursting water pipes are a major concern when winter temperatures drop below freezing. But why do frozen pipes burst?

Perhaps surprisingly, freezing pipes don't burst because of ice expanding in place. Instead, it has to do with pressure inside the pipes.

When water freezes, its molecules crystalize into an open hexagonal form, which takes up more space than when the molecules are in their liquid form — that is, the water molecules expand as they freeze.

As the ice expands, it pushes water toward the closed faucet. This causes an immense amount of water pressure to build between the ice blockage and the faucet — eventually, the pipe ruptures under the pressure, usually at a spot where there's little or no ice.

The pipe areas upstream of the ice clog aren't typically in danger of bursting because the pressure isn't great enough. In this case, the water isn't blocked, and can always retreat back to its source.

Pipes that are the most at risk of bursting are those located outside of building insulation, or those in unheated interior areas, including basements, attics and crawl spaces.

Heating or insulating these vulnerable pipes with fiberglass or foam sleeves can help prevent them from bursting. Additionally, keeping the facet open and letting the water run — even at just a trickle — will help prevent the water pressure from building to dangerous levels.