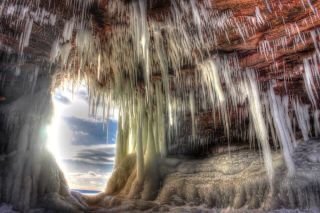 Giant icicles create dramatic views from inside the sea caves in the Apostle Islands National Lakeshore, which is located along the shores of Lake Superior in northern Wisconsin.
(Image: © U.S. Department of the Interior | Twitter )

For the first time in five years, intrepid visitors to the Apostle Islands National Lakeshore can make the icy trek along the frozen waters of Lake Superior to glimpse the millions of icicles — some several stories tall — that embellish the region's incredible ice caves.

The Apostle Islands National Lakeshore is made up of 22 islands in Lake Superior, located off the coast of northern Wisconsin. The area boasts some of the most impressive sea caves in the Great Lakes region, and during warmer months, visitors can paddle along the sculpted shorelines and navigate through the caves' scenic passageways and arched chambers. But, during the winter, witnessing the caves' icy transformation is much trickier.

This year, however, the ice on Lake Superior is thick enough for people to reach the ice caves — for the first time since 2009, according to officials at the U.S. Department of the Interior. [Ice World: Gallery of Awe-Inspiring Glaciers]

The Interior Department released a jaw-dropping photo of one of the Apostle Islands ice caves, showing thick ice blanketing the cave's interior, and spectacular icicles dangling from the ceiling. The stunning scene, which appears more like a painting than a real ice-scape, looks out from the mouth of the frozen cave.

The National Park Service (NPS) opened the ice caves to visitors in mid-January, and within the first 10 days, some 10,000 made the wintry journey, according to The Reporter. Typically, the area attracts roughly 35,000 visitors each year, and the peak periods tend to be in the summer months, said Neil Howk, an official with the NPS.

"We are in uncharted waters — we've never seen any kind of response like this," Howk told The Reporter.

To reach the Apostle Islands' picturesque and colorful caves, visitors must hike at least 2 miles (3.2 kilometers) across the ice of Lake Superior, according to officials at the Interior Department. This icy trek can be dangerous, and conditions can be unpredictable. The NPS monitors the thickness of the lake ice, and provides updates and current information on the region's conditions via the agency's Ice Line, which can be reached at (715) 779-3397 extension 3.

If ice conditions are considered low-risk, the NPS will deem the ice caves accessible to visitors. But, officials at the Apostle Islands National Lakeshore recommend checking the Ice Line for updates, as ice conditions can change rapidly. Cold temperatures can form thick ice on Lake Superior, but wind and waves can break up these formations and make the ice unstable, according to officials at the Interior Department.