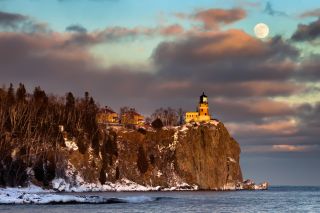 The moon rises at sunset at Split Rock Lighthouse, on the North Shore of Lake Superior in Minnesota.
(Image: © Igor Kovalenko | Shutterstock)

How deep is Lake Superior?

The deepest point in Lake Superior is 1,300 feet (400 meters) below the surface, making a complete freeze a rarity. Lake Superior boasts extremely clear water, with an average underwater visibility of 27 feet (8.2 m). It takes almost 200 years for the lake to refill with new water, according to the University of Wisconsin.

Like all of the Great Lakes, Lake Superior is prone to lake effect snow, but the weather is generally moderate, with warmer temperatures than inland throughout the year. Winter temperatures around the lake rarely fall below minus 30 F (minus 34 C), well above inland temperatures. June and July are calm months, while October and November are prone to storms.

During most winters, the lake is 40 to 95 percent covered with ice, although it rarely completely freezes. The last time Lake Superior froze over was in 2014. Overall, the Great Lakes reached a 91 percent ice cover that year, which is the most the lakes have frozen since 1979. Freezing of the lakes is monitored because it affects hydropower generation, commercial shipping, the fishing industry and more, according to the Office of Oceanic and Atmospheric Research.

Lake Superior first took shape about 1.2 billion years ago as a result of the North American Mid-Continent Rift, which carved an arc-shaped scar stretching from Kansas through Minnesota. The first people to settle in the region arrived around 8000 B.C., after glaciers retreated, according to History of Lake Superior: A Timeline. By 500 B.C., Laurel people were trading for metal and other goods with different regions. By the early 1600s, the Ojibway people had established a village of several thousand on Madeline Island.

The lake's name comes from the French word lac supérieur, which means "upper lake." It called this because it is north of Lake Huron, which was discovered first by Brûlé. The Objibways said that the lake was protected by Nanabijou, Spirit of the Deep Sea Water, according to the University of Wisconsin.

Superior was a major mode of transportation for the fur industry and other trading activities during the Colonial period and remains a shipping hub today.

Because of varying depths and unpredictable weather, Lake Superior and the other Great Lakes have been prone to maritime accidents. One of the most well-known incidents occurred on November 10, 1975, when the Edmund Fitzgerald, a large cargo ship carrying iron ore, encountered a severe storm that killed the ship's 29 crew members.

Lake Superior is home to about 80 species of fish, including carp and varieties of trout, salmon and perch.

The Lake Superior region is also home to many common native plant species, including Michigan's state tree, the white pine, and Flowering Rush, an aquatic plant that grows along the shoreline. Lake Superior's basin is home to nearly 60 orchid species.

As with many lakes, Lake Superior is home to many species of birds, including varieties of hawks, loons, owls and woodpeckers. Duluth's Hawk Ridge, which is on the lake's north shore, hosts as many as 10,000 migrating birds of prey each day during the fall migration season.

There is a small population of endangered whooping cranes on the lake's north shore, one of only two crane species in North America. As of 2017, there were only 483 individuals in the wild across North America, according to the International Union for Conservation of Nature.