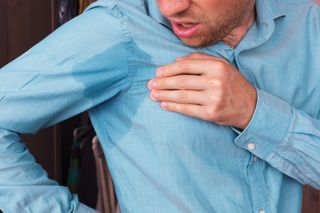 Why is fabric darker when it's wet?
(Image: © Shutterstock)

No matter how much deodorant we use, it's challenging to hide the signs of overexertion. Armpit stains and back perspiration are all too visible under the fluorescent lights at the local gym, as our T-shirts and tank tops take on a two-tone shade of sweaty and dry.

But why is fabric darker when it's wet? You might resent that clothing manufacturers haven't solved the issue yet. However, it has nothing to do with the makeup of the T-shirt itself. Rather, it's a matter of how the eyes perceive light and how some wet objects refract light differently than their dry counterparts.

In reality, wet fabric isn't actually darker than dry fabric. Rather, it just looks darker to the human eye. The same goes for other wet-versus-dry surfaces, like wet cement after a rainstorm, or wet sand after waves slosh over it. [How Do We See Color?]

When light — from the sun or a lamp, for example — hits an object, some of that light is absorbed, and some is reflected. The wavelength of light (measured on a scale of billionths of meters) that's reflected off the object back into our eyes determines what color we perceive the object to be. A blue shirt absorbs all wavelengths of light except those that make up the color blue (roughly 450 nanometers) and reflects what's left into the area around it, including our light-sensitive retinas.

But according to Richard Sachleben, a retired chemist and member of the American Chemical Society's panel of experts, the colors we perceive in that reflected light depend on the properties of the surface the light is bouncing off.

When you spill water on your pants, or sweat into a T-shirt, an additional layer of water coats the fabric. So, once light hits a wet shirt, that water layer causes less of the blue shirt's blue wavelengths of light to be reflected toward your eyes and more of the blue light to be refracted, or bounce away from you, back into the fabric. This phenomenon is called total internal reflection.

"The water doesn't absorb the color, as water itself is colorless," Sachleben told Live Science. "But instead, the water acts as a guide on the fabric's surface, changing the angle that light is hitting the shirt."

In other words, the water — including those unseemly armpit sweat marks — helps the fabric surface absorb more of the light that hits it, which makes us perceive those parts of the shirt as darker.

Sachleben said this phenomenon applies to paint, too. "Thinking about what color to paint your house or your bedroom wall is a big deal, and it will look different when [the paint] is wet and when it's dry for a similar reason," he said.

However, many factors — not just a layer of sweat or water — affect how humans perceive color, Sachleben noted. "A surface looks different depending on what kind of light, what intensity of light and the angle of light hitting it," he said.

But if water spills or sweat marks get you down, fret not: They'll evaporate soon, letting you go about your day with a dry shirt.