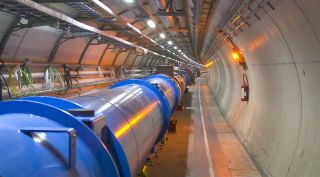 The Large Hadron Collider (LHC) is a marvel of modern particle physics that has enabled researchers to plumb the depths of reality. Its origins stretch all the way back to 1977, when Sir John Adams, the former director of the European Organization for Nuclear Research (CERN), suggested building an underground tunnel that could accommodate a particle accelerator capable of reaching extraordinarily high energies, according to a 2015 history paper by physicist Thomas Schörner-Sadenius.

The project was officially approved twenty years later, in 1997, and construction began on a 16.5-mile-long (27 kilometer) ring that passed beneath the French-Swiss border capable of accelerating particles up to 99.99 percent the speed of light and smashing them together. Within the ring, 9,300 magnets guide packets of charged particles in two opposite directions at a rate of 11,245 times a second, finally bringing them together for a head-on collision. The facility is capable of creating around 600 million collisions every second, spewing out incredible amounts of energy and, every once in a while, an exotic and never-before-seen heavy particle. The LHC operates at energies 6.5 times higher than the previous record-holding particle accelerator, Fermilab's decommissioned Tevatron in the U.S.

The LHC cost a total of $8 billion to build, $531 million of which came from the United States. More than 8,000 scientists from 60 different countries collaborate on its experiments. The accelerator first switched on its beams on September 10, 2008, colliding particles at only a ten-millionth of its original design intensity.

Before it began operations, some feared that the new atom smasher would destroy the Earth, perhaps by creating an all-consuming black hole. But any reputable physicist would state that such worries are unfounded.

"The LHC is safe, and any suggestion that it might present a risk is pure fiction," CERN Director General Robert Aymar has told LiveScience in the past.

That's not to say the facility couldn't potentially be harmful if used improperly. If you were to stick you hand in the beam, which focuses the energy of an aircraft carrier in motion down to a width of less than a millimeter, it would make a hole right through it and then the radiation in the tunnel would kill you.

Over the last 10 years, the LHC has smashed atoms together for its two main experiments, ATLAS and CMS, which operate and analyze their data separately. This is to ensure that neither collaboration is influencing the other and that each provides a check on their sister experiment. The instruments have generated more than 2,000 scientific papers on many areas of fundamental particle physics.

On July 4, 2012, the scientific world watched with bated breath as researchers at the LHC announced the discovery of the Higgs boson, the final puzzle piece in a five-decade-old theory called the Standard Model of physics. The Standard Model tries to account for all known particles and forces (except gravity) and their interactions. Back in 1964, British physicist Peter Higgs wrote a paper about the particle that now bears his name, explaining how mass arises in the universe.

The Higgs is actually a field that permeates all of space and drags on every particle that moves through it. Some particles trudge more slowly through the field, and this corresponds to their larger mass. The Higgs boson is a manifestation of this field, which physicists had been chasing after for half a century. The LHC was explicitly built to finally capture this elusive quarry. Eventually finding that the Higgs had 125 times the mass of a proton, both Peter Higgs and Belgian theoretical physicist Francois Englert were awarded the Nobel Prize in 2013 for predicting its existence.

Even with the Higgs in hand, physicists can't rest because the Standard Model still has some holes. For one, it doesn't deal with gravity, which is mostly covered by Einstein's theories of relativity. It also doesn't explain why the universe is made of matter and not antimatter, which should have been created in roughly equal amounts at the beginning of time. And it is entirely silent on dark matter and dark energy, which had yet to be discovered when it was first created.

Before the LHC turned on, many researchers would have said that the next great theory is one known as supersymmetry, which adds similar but much more massive twin partners to all known particles. One or more of these heavy partners could have been a perfect candidate for the particles making up dark matter. And, supersymmetry begins to get a handle on gravity, explaining why it is so much weaker than the other three fundamental forces. Prior to the Higgs' discovery, some scientists were hoping that the boson would end up being slightly different than what the Standard Model predicted, hinting at new physics.

But when the Higgs turned up, it was incredibly normal, exactly in the mass range where the Standard Model said it would be. While this is a great achievement for the Standard Model, it has left physicists without any good leads to go on. Some have begun to talk about the lost decades chasing down theories that sounded good on paper but seem not to correspond to actual observations. Many are hoping that the LHC's next data-taking runs will help clear up some of this mess.

The LHC shut down in December 2018 to go through two years of upgrades and repairs. When it comes back online, it will be able to smash atoms together with a slight increase in energy but at double the number of collisions per second. What it will find then is anybody's guess. There is already talk of an even more powerful particle accelerator to replace it, situated in the same area but four times the LHC's size. The enormous replacement could take 20 years and $27 billion to construct.