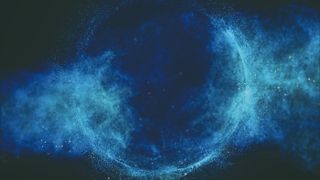 One of the biggest achievements of the Large Hadron Collider was the discovery of the Higgs boson particle. Here, an artist’s conception of the Higgs field, which permeates the universe; when fundamentally particles interact with this field, they are given mass.
(Image: © CERN)

Back in 2008, a beam of protons first zipped around the Large Hadron Collider (LHC), the world's most powerful particle accelerator. Now, a decade later, it is time to take stock of what we've learned thanks to this facility and what lies ahead.

This accounting includes both future research that the LHC can conduct and possible new facilities that could collide particles at energies far beyond what the LHC can achieve. Two, or maybe three, possible replacements for the LHC have been proposed. So, let's review where we are and where we've come over the last decade.

The story of the LHC is both exhilarating and turbulent, with events ranging from disastrous damage to the instrument's huge magnets in the first days of operations, to a phoenix-like rise from that tragedy, followed by solid and exciting discoveries, including the discovery of the Higgs boson. That find earned Peter Higgs and Francois Englert the Nobel Prize, as they had predicted the particle over half a century ago. It is unusual for the world to raptly follow particle physics news, but the announcement of the Higgs' discovery led newscasts across the globe. [5 Elusive Particles Beyond the Higgs]

Physicists were also at the edge of their seats, awaiting what they hoped would be unexpected discoveries. For nearly half a century, scientists have had the current theoretical understanding of the behavior of subatomic matter worked out. This understanding is called the Standard Model of particle physics.

The model explains the observed behavior of the molecules and atoms of ordinary matter and even of the smallest known building blocks ever observed. These particles are called quarks and leptons, with quarks found inside the protons and neutrons that comprise the atom's nucleus and with electrons being the most familiar lepton. The Standard Model also explains the behavior of all of the known forces, except for gravity. It's truly an extraordinary scientific accomplishment.

However, the Standard Model doesn't explain all things in theoretical physics. It doesn't explain why the quarks and leptons seem to exist in three distinct, but nearly identical configurations, called generations. (Why three? Why not two? Or four? Or one? Or 20?) This model doesn't explain why our universe is made entirely of matter, when the simplest understanding of Albert Einstein's theory of relativity says that the universe should also contain an equal amount of antimatter.

The Standard Model doesn't explain why studies of the cosmos suggest that the ordinary matter of atoms makes up a mere 5 percent of the matter and energy of the universe. The remainder is thought to consist of dark matter and dark energy. Dark matter is a form of matter that experiences only gravity and none of the other fundamental forces, while dark energy is a form of repulsive gravity that permeates the cosmos. [The 18 Biggest Unsolved Mysteries in Physics]

Prior to the LHC's first operations, physicists like me hoped that the atom smasher would help us answer these puzzling questions. The most commonly cited candidate theory to explain those puzzles was called supersymmetry. It suggests that all known subatomic particles have "superpartner" counterpart particles. These, in turn, could provide an explanation for dark matter and answer some other questions. However, physicists haven't observed any supersymmetry. What's more, LHC data has ruled out the simplest theories incorporating supersymmetry. So, what has the LHC accomplished?

The LHC has done a lot

Well, aside from that whole Higgs boson thing, the LHC has fed data to its four large experimental collaborations, resulting in more than 2,000 scientific papers. Inside the LHC, particles have been smashed into each other at energies 6.5 times higher than those achieved by the Fermilab Tevatron, which held the title of world's most powerful particle accelerator for a quarter century, until the LHC took that crown.

These tests of the Standard Model were very important. Any one of those measurements could have disagreed with predictions, which would have led to a discovery. However, it turns out that the Standard Model is a very good theory, and it made as accurate predictions at LHC collision energies as it did for the energy levels in the earlier Tevatron.

So, is this a problem? In a very real sense, the answer is no. After all, science is as much about testing and rejecting wrong new ideas as it is about validating correct ones.

On the other hand, there is no denying that scientists would have been far more excited to find phenomena that weren't previously predicted. Discoveries of that type drive human knowledge, culminating in the rewriting of textbooks.

The LHC story is not over

So, now what? Has the LHC finished telling us its tale? Hardly. Indeed, researchers are looking forward to improvements to the equipment that will help them study questions they can't address using current technology. The LHC shut down in early December 2018 for two years of refurbishments and upgrades. When the accelerator resumes operations in the spring of 2021, it will return with a slight increase in energy but double the number of collisions per second. Taking into account future planned upgrades, LHC scientists have thus far recorded only 3 percent of the expected data. While it will take many years to sift through all the findings, the current plan is to record about 30 times more data than has been obtained to date. With that much more data to come, the LHC still has a lot of story to tell.

Still, while the LHC will operate for probably another 20 years, it's perfectly reasonable to also ask, "What's next?" Particle physicists are thinking about building a follow-on particle accelerator to replace the LHC. Following in the LHC tradition, one possibility would collide beams of protons together at mind-boggling energies — 100 trillion electron volts (TeV), which is much larger than the LHC's top capability of 14 TeV. But accomplishing those energies will require two things: First, we'd need to build magnets that are twice as powerful as the ones that push particles around the LHC. That's considered challenging but achievable. Second, we'll need another tunnel, much like the LHC's, but well over three times bigger around, with a ballpark circumference of 61 miles (100 kilometers), about four times bigger than that of the LHC.

But where will this big tunnel be built, and what will it really look like? What beams will collide and at what energy? Well, those are good questions. We're not far enough along in the design and decision-making process to get answers, but there are two very large and accomplished groups of physicists thinking about the issues, and they have each generated a proposal for a new accelerator. One of the proposals, largely driven by European research groups, imagines building a large additional accelerator, most likely located at the CERN laboratory, just outside Geneva.

Under one idea, a facility there would collide a beam of electrons and antimatter electrons. Because of differences between accelerating protons compared to electrons — an electron beam loses more energy around the circular structure than a proton beam does — this beam would use the 61-mile-long tunnel but operate at lower energy than if it were protons. Another proposal would use the same 61-mile-long accelerator to collide beams of protons. A more modest proposal would reuse the current LHC tunnel but with more-powerful magnets. That option would only double the collision energy above what the LHC can do now, but it's a less expensive alternative. [Image: Inside the World's Top Physics Labs] Another proposal, largely championed by Chinese researchers, imagines an entirely new facility, presumably built in China. This accelerator would also be about 61 miles around, and it would collide electron and antimatter electrons together, before switching to proton-proton collisions in about 2040.

These two potential projects are still in the talking stages. Eventually, the scientists making these proposals will have to find a government or group of governments willing to foot the bill. But before that can happen, the scientists need to determine the capabilities and technologies required to make these new facilities possible. Both groups recently released extensive and thorough documentation about their designs. That's not enough to build their proposed facilities, but it is good enough to both compare the projected performances of the future laboratories and start putting together reliable cost predictions.

Investigating the frontier of knowledge is a difficult endeavor, and it can take many decades from the first dreams of building a facility of this magnitude, through operations to the facility's shutdown. As we mark the 10-year anniversary of the first beam in the LHC, it's worth taking stock of what the facility accomplished and what the future will bring. It looks to me like there will be exciting data for the next generation of scientists to study. And maybe, just maybe, we'll learn a few more of nature's fascinating secrets.