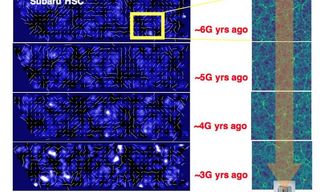 By analyzing the gravitational lensing of distant galaxies, researchers have created a detailed, 3D map of the distribution of dark matter in the universe.
(Image: © HSC PROJECT/UTOKYO )

There's a huge amount of matter in the universe that we can't directly see. But scientists can tell it's there. They call it dark matter.

They know it's there because its gravity tugs on the stars and galaxies around it, altering their movement. Dark matter also tugs on light as it passes, bending its path, a phenomenon called gravitational lensing. And now, by studying where that lensing appears in the sky, an international team of scientists have released a detailed, 3D map of dark matter.

The biggest advantage of the cosmic map, which was published Monday (Sept. 24) in the preprint journal arXiv, is that it will help scientists figure out precisely how and where dark energy — an unseen energy that suffuses the universe, accelerating its expansion — operates in space, researchers said in a statement

"Our map gives us a better picture of how much dark energy there is and tells us a little more about its properties and how it's making the expansion of the universe accelerate," Rachel Mandelbaum, an astronomer  at Carnegie Mellon University in Pittsburgh who was involved in the survey, said in the statement.

To build the map, the researchers carefully studied the shapes of up to 10 million galaxies, including those from very far away in space, from which light created billions of years ago, during the early universe, is only now reaching Earth. [The 11 Most Beautiful Mathematical Equations]

They measured how much those galaxies' shapes seemed to be distorted from what astronomers expect, and then teased out how much of that distortion was due to dark matter lensing, rather than the effects from the atmosphere or the telescope and detector used. That difference allowed researchers to infer how much dark matter the light had to pass through before reaching Earth.

This map is drawn from just the first of five years' worth of observations from the Japanese Subaru Telescope in Hawaii, as part of a project called the Hyper Suprime-Cam survey (HSC). The HSC will continue to peer through space for four more years to make its map more precise and complete.

One early result: The HSC found evidence for a bit less dark energy in the universe than another survey, conducted previously in Europe, called the Planck survey. That survey looked at the faint traces of the Big Bang left behind in electromagnetic radiation, known as the cosmic microwave background. The slight difference is small enough that it's not statistically significant, meaning there could be no true difference at all, but the difference is tantalizing, they said.

The new map hints that dark energy doesn't behave quite the way scientists believe it does, the researchers said in the statement.