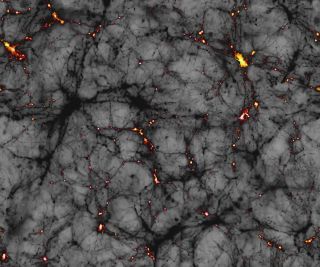 Dark matter, the mysterious substance making up a quarter of the mass and energy of the universe, might be made from extremely tiny and light particles, new research suggests. This “fuzzy” form of dark matter—called that because these miniscule particles' wavelengths would be smeared out over a colossally huge area—would have altered the course of cosmic history and created long and wispy filaments instead of clumpy galaxies in the early universe, according to simulations.

The findings have observational consequences — upcoming telescopes will be able to peer back to this early time period and potentially distinguish between different types of dark matter, allowing physicists to better understand its properties.

Dark matter is an unknown massive substance  found throughout the cosmos. It gives off no light — hence the name dark matter — but its gravitational effects help bind together galactic clusters and cause stars at the edges of galaxies to spin faster than they otherwise would. Many scientists believe that most dark matter is cold, meaning it moves relatively slowly. But there are entirely different ideas, such as the possibility that it's tiny and fuzzy, meaning it would move quickly because it’s so light.

"Our simulations show that the first galaxies and stars that form look very different in a universe with fuzzy dark matter than a universe that has cold dark matter," Lachlan Lancaster, an astrophysics graduate student at Princeton University and co-author of a new paper in the journal Physical Review Letters, told Live Science.

Lancaster explained that the most common speculations about dark matter suggest it is composed of weakly interactive massive particles (WIMPs), which would have a few tens or hundreds of times the mass of a proton. Simulations that use this type of dark matter are extremely good at re-creating the large-scale structure of the universe, including vast voids of empty space surrounded by  long, spidery filaments  of gas and dust, a formation known as the cosmic web. But on smaller scales, such models contain a number of discrepancies from what astronomers observe with their telescopes. In this standard view, dark matter should pile up in the centers of galaxies, but nobody has seen it doing so.

Fuzzy dark matter would therefore have a harder time clumping together than cold, WIMP dark matter. In simulations, Lancaster and his co-authors showed that a cold dark-matter universe would have galaxies that formed relatively quickly out of spherical halos.

But fuzzy dark matter would instead coalesce into long, wispy strings of material — "more giant filaments than clumpy galaxies," Lancaster said — and galaxies would then be born larger and later. Dark matter would also have a harder time piling up in the centers of galaxies, potentially explaining why astronomers don't observe this clumpiness when they look at galaxies.

Instruments like the Large Synoptic Survey Telescope (LSST) in Chile and 30-meter-class telescopes being built around the world will soon be able to peer back to some of the universe's earliest days. They are expected to start taking data in the next decade, which means "we'll either start seeing the effects of fuzzy dark matter, or start ruling them out," Lancaster said.

Though other researchers have speculated about fuzzy dark matter, the new simulations do a more careful job of working out its cosmological effects, said Jeremiah Ostriker, an astrophysicist at Columbia University who was not involved in the work.

"This helps outline the details of what the formation of structure would be in this variant theory," OStriker added. "And it's one of the most interesting variant theories around."

Lancaster said his team's future simulations might focus on capturing more details of the fuzzy dark matter's effects, potentially giving astronomers a better idea of what they might expect to see through their telescopes.