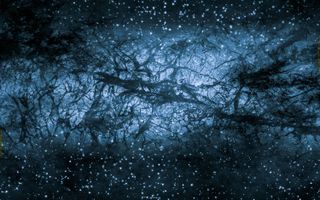 Physicists have long sought to uncloak dark matter and get an actual look at the mysterious substance that makes up a quarter of the universe. One idea for what's hiding beneath the cloak of invisibility? Many tiny, fuzzy particles that behave like one gigantic particle.

But the most recent hunt for such fuzzy, ultralight particles, published on Feb. 28 in the Journal of Cosmology and Astroparticle Physics, has come up empty-handed.

The results suggest that if dark matter is really made of these miniscule particles, it is as elusive as its name suggests, and barely interacts with ordinary matter. [The 11 Biggest Unanswered Questions About Dark Matter]

Dark matter is one of the universe's best-kept secrets. The stuff does not interact with light, yet exerts a gravitational pull on other matter. Though it makes up around a quarter of the mass and energy in the universe, scientists can't seem to find it, or even figure out what it's made of.

Many scientists speculate that dark matter could be comprised of weakly interacting massive particles, WIMPs. But WIMP theories come up short in several ways. For example, these particles should cause small structures in the web of galaxies that astronomers haven't seen. So instead, some scientists are looking in another direction for dark matter — to ultralight particles.

While there are many ideas of what dark matter might be, none of them have much supporting evidence, said Sergey Troitsky, a co-author of the paper and a researcher at the Institute for Nuclear Research at the Russian Academy of Sciences. "So one needs to consider, study, and exclude all possibilities one by one."

Some theories of ultralight, also known as fuzzy, dark matter, propose a particle that's around 10^28 times lighter than an electron.This "fuzzy" dark matter is so named because its low mass means it acts more like a smeared particle with blurry boundaries than a wave.The new research tested a way to look for these types of particles in the light from active galaxies.

Since dark matter makes up such a large portion of the universe, if it is made of ultralight particles, there must be a lot of them. So many, in fact, that they would exist in a unique state, like a field or a Bose-Einstein condensate — a state where particles, often at ultra-cool temperatures, clump together and act cohesively as one. While individual dark matter particles don't interact with light — which is why scientists have struggled to find them — on large scales, the field would have a noticeable effect on the polarization, or the orientation, of light as it wiggles through space. This would occur as the density of the field regularly oscillates, in effect changing the way the light traveled through the region.

To look for changes in the polarization of light due to fields of ultralight dark matter, the scientists looked at archival data from the Very Long Baseline Array, a radio telescope composed of 10 (82 feet) (25 meter) telescopes operated from Socorro, New Mexico. They focused on light from the hearts of 30 galaxies, which spew out huge quantities of matter in jets that can stretch hundreds of light-years across. The light from these galaxies is highly polarized and has been well-studied, so long-term archival data about them was already available.

"We often use astrophysical data from published papers or publicly available databases to constrain properties of elementary particles," Troitsky told Live Science. "But this time we contacted our fellow radio astronomers and they dug in their own data, carefully selecting observational series just for our task."

Analyzing two decades of data, the scientists found a lot of oscillations, but not the types they were looking for. Active galactic nuclei often pulse without a regular frequency. But oscillations from ultralight dark matter would all occur with the same length of time between oscillations.

Ultimately, the scientists did not see any signs of ultralight dark matter, at least at the types of masses that could explain the lack of small structures found in the web of galaxies. However, that doesn't mean they absolutely don't exist.

"There is no guarantee that a dark matter particle has any interaction with the visible world besides gravity," Troitsky said. "It would be very hard to discover such a particle with some mass and no other interaction, though that is indeed one of the simplest options to explain dark matter."

While the new research might make conventional ultralight dark matter unlikely, researchers aren't ready to rule it out.

"The only thing we know for sure about dark matter is that it lies outside of known particle physics," said Rennan Barkana, an astronomer at Tel Aviv University in Israel, who wasn't involved with the study. "So, until we have convincing observational evidence of the nature of dark matter, we should be careful about guesses and speculations … and keep an open mind."