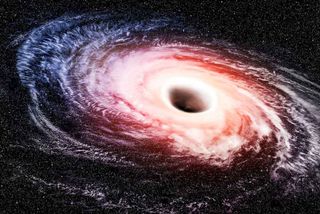 An artist's conception of a black hole
(Image: © Shutterstock)

A supermassive black hole was recently caught gobbling up a star, and the stream of particles the black hole spat out could reveal a secret principle that governs how galaxies grow.

The black hole feast was first detected on Nov. 11, 2014, by X-ray and radio telescopes all around the world. The signals, which came from 300 million light-years away from Earth, captured the brutal last moments of a star, known as a tidal disruption flare. This explosion of electromagnetic energy occurs when the immense gravitational pull of a black hole rips apart a passing star. [Stephen Hawking's Most Far-Out Ideas About Black Holes]

"The black hole first destroys the star. It makes a soup out of it," said Dheeraj Pasham, a postdoctoral researcher at the Kavli Institute for Astrophysics and Space Research at the Massachusetts Institute of Technology, and lead author of a paper published this week in the Astrophysical Journal. "When this happens, we see a sudden flash of radiation in the sky.The soup gradually falls into the black hole, and that's how the black hole is feeding."

That led the astronomers to postulate that the source of the X-ray signal must be the matter drawn toward and energized by the black hole, while the radio waves come from a stream of highly energized material escaping the black hole, called a relativistic jet.

Previously, scientists thought that the radio waves came from the explosion of the star as it got slammed by tidal waves from the black hole. According to this hypothesis, the explosion energizes plasma particles in the surrounding space, and these energized particles then emit radio waves. However, if that were the case, there would be no relationship between the radio waves and the X-rays generated by the material falling into the black hole, the researchers said.

"We argue that this coupling between the radio and the X-ray radiation is telling us that the radio must come from the jet and that the jet is regulated by the accretion," or the growth of the black hole, Pasham told Live Science. "The data clearly indicate that whatever falls into the black hole propels the jet."

As the black hole devours more of the "star soup," the jet escaping from the black hole strengthens. This study marks the first time that astronomers have spotted such a correlation in one object, the researchers said.

Pasham said that if future observations show a similar pattern, scientists could begin to understand the origins of the mysterious jets. These jets stream out of black holes at nearly the speed of light, and some astronomers believe the jets could be the source of galactic cosmic rays, the streams of high-energy particles zooming through space across vast distances.

"How jets are launched by black holes, that's a big mystery in astrophysics," said Pasham.

Beyond that, if a simple relationship ties the accretion rate, or rate at which a black hole gobbles up mass, to the size of the black hole's relativistic jet, that relationship could affect how galaxies grow, the researchers said in a statement. That's because galaxies grow when new stars form, but star formation requires cold temperatures. Black hole jets, meanwhile, heat up their surrounding environment, which could make it temporarily too hot to form new stars. Knowledge of the size of black hole jets could then be used to predict galaxy growth rates, the researchers said.

"If the rate at which the black hole is feeding is proportional to the rate at which it's pumping out energy, and if that really works for every black hole, it's a simple prescription you can use in simulations of galaxy evolution," Pasham said in the statement. "So, this is hinting toward some bigger picture."