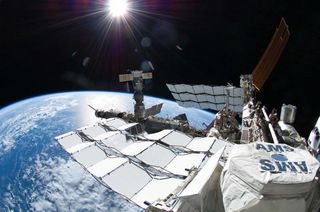 The AMS particle detector has been capturing cosmic ray data from the International Space Station for three years.
(Image: © NASA)

A particle detector floating 250 miles (400 kilometers) above Earth has analyzed 41 billion cosmic-ray particles, and the data have revealed new insights into the mysterious and invisible dark matter that physicists believe makes up 27 percent of the universe.

The Alpha Magnetic Spectrometer (AMS) detector aboard the International Space Station already gathered evidence of dark matter last year, but the new results are the most precise measurements of cosmic-ray particles yet. They include 50 percent more data, and have revealed new insights into the origin of the particles found in cosmic rays, Samuel Ting, a professor of physics at MIT and an AMS spokesman, said during a live webcast at the CERN (the European Organization for Nuclear Research) lab in Switzerland yesterday (Sept. 18).

Physicists theorized the existence of invisible, and so far undetectable, dark matter as a way to explain why galaxies and celestial bodies don't just unravel and fly apart. All matter creates its own gravitational force, but according to calculations, visible matter doesn't have nearly enough gravity to hold the universe together. Physicists estimate that there must be about five times as much dark matter as there is visible matter in order to hold the universe together. [Wacky Physics: The Coolest Little Particles in Nature]

But physicists don't know what dark matter is made of, or how to detect it directly. A popular theory proposes that dark matter is made of weakly interacting massive particles (WIMPs). Physicists suspect that when two WIMPs collide, they annihilate each other and create an electron and its antimatter partner, the positron. Positrons have the same mass as electrons, but have a positive charge instead of a negative one.

That's where AMS and cosmic-ray data come in. Cosmic rays are made mostly of parts of atoms, including protons and nuclei with their electrons stripped away, as well as high-energy positrons and electrons mixed in. But there's a huge excess of positrons relative to electrons, so physicists don't think cosmic rays are the only source of positrons. Physicists think the other source could be the collision of elusive particles of dark matter.

AMS can measure each particle's energy level in gigaelectron volts (GeV). One GeV is equal to 1 billion electron volts. The cosmic-ray data collected by AMS showed that the stream of positrons was completely different from the stream of electrons in both magnitude and energy. [How the Antimatter-Hunting Alpha Magnetic Spectrometer Works (Infographic)]

"They have no relation whatsoever with each other," Ting said. "This is a very, very strange thing. We spent a lot of time checking this; there's no question this is not correct."

Ting and other physicists think the differences must mean that positrons and electrons are coming from separate sources.

Ting said it took half a century of cosmic-ray experiments to calculate this peak. The next step is to figure out how quickly the number of positrons decreases at energy levels greater than 275 GeV, he said. However, it's clear that positrons are decreasing much more slowly than electrons. One explanation for the difference is that positrons are being replenished by dark-matter collisions.

To prove that dark matter exists, physicists need to directly catch the particles. That will probably involve catching the particles interacting with other regular matter particles.

"There are many, many explanations possible," Ting said. "So far, measurements are consistent with a uniform source — dark matter. But that doesn't mean we have proven dark matter exists."

The results were presented at a conference held at CERN and published in the journal Physical Review Letters.