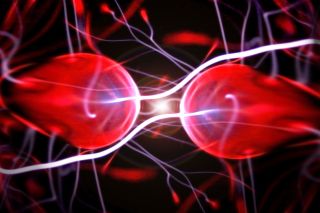 Artist's conception of a particle collision.
(Image: © Image via Shutterstock)

In 1964, the British physicist Peter Higgs wrote a landmark paper hypothesizing why elementary particles have mass. He predicted the existence of a three-dimensional "field" that permeates space and drags on everything that trudges through it. Some particles have more trouble traversing the field than others, and this corresponds to them being heavier. If the field — later dubbed the Higgs field — really exists, then Higgs said it must have a particle associated with it: the Higgs boson.

Fast forward 48 years: On Wednesday (July 4), physicists at the Large Hadron Collider (LHC), the world's largest atom smasher in Geneva, Switzerland, announced they had discovered a Higgs-like particle at long last. If the new particle turns out to be the Higgs, it will confirm nearly five decades of particle physics theory, which incorporated the Higgs boson into the family of known particles and equations that describe them known as the Standard Model.

The search for the Higgs gained a level of public attention unusual for physics partly thanks to the physicist Leon Lederman's 1993 book "The God Particle" (Dell Publishing). Lederman gave the Higgs its godly nickname because the particle is "so central to the state of physics today, so crucial to our final understanding of the structure of matter, yet so elusive," he wrote in the book. However, he quipped that the second reason was that "the publisher wouldn't let us call it the Goddamn Particle, though that might be a more appropriate title, given its villainous nature and the expense it is causing."

Indeed, the Higgs boson eluded detection through the construction and shutdown of two expensive high-energy particle colliders built partially for the purpose of detecting it. In these colliders, particles are accelerated through a tunnel and then smashed together, producing an excess of energy that sometimes takes the form of new and exotic particles. Only the Large Hadron Collider at CERN Laboratory, the most powerful particle collider ever built, turned out to probe energies high enough to generate a Higgs particle, which is roughly 125 times the mass of a proton. [What If You Put Your Hand in the LHC Beam?]

But what does the Higgs particle actually do? How does it, and the Higgs field associated with it, give things mass?

In physics, when particles interact with fields, the interaction must be mediated by a particle. Interactions with the electromagnetic (EM) field, for example, are mediated by photons, or particles of light. When a negatively charged electron is pulled by the EM field toward a positively charged proton, the electron experiences the EM field by absorbing and emitting a constant stream of "virtual photons" — photons that momentarily pop in and out of existence just for the purpose of mediating the particle-field interaction. Furthermore, when the EM field is "excited," meaning its energy is flared up in a certain spot, that flare-up is, itself, a photon — a real one in that case.