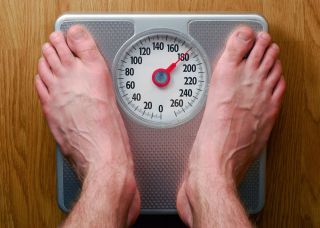 The infamous Higgs particle has a weighty task: It grants all the other elementary particles their mass. Without it, they — we — would zip around frantically at the speed of light, too foot-loose to form atoms. But how does the Higgs do it?

In lieu of equations, physicists tend to explain the process in terms of sports and syrup.

First, each of the elementary particles acquires its unique set of attributes by interacting with invisible entities called fields. Like football fields, these are large stages upon which individuals (be they electrons or running backs) dash this way and that, and occasionally bash together. But unlike football fields, the fields of physics are three-dimensional, and extend infinitely in all directions.

One such field is the electromagnetic (EM) field — the kind you can feel near the poles of a red and silver bar magnet, but which actually exists everywhere all the time. Each particle interacts with the EM field in a way that depends on its electric charge. For example, electrons, whose charge is -1, tend to move through the field toward the positive ends of bar magnets, and to clump together with positively charged protons.

Like a sports field with its corresponding ball, each field of physics has a corresponding particle. The EM field, for example, is associated with the photon, or particle of light. This correspondence plays out in two ways: First, when the EM field is "excited," meaning its energy is flared up in a certain spot, that flare-up is, itself, a photon.

Secondly, when particles interact with the EM field (for example, when they are drawn toward the oppositely charged end of a magnet), they experience the field by absorbing and emitting a constant stream of "virtual photons" — photons that momentarily pop in and out of existence just for the purpose of mediating the particle-field interaction.

There also exists a Higgs field. It gives particles mass. [How Do You Weigh an Atom?]

Except for masless photons and gluons, "all elementary particles get their masses from their interactions with the [Higgs] field, kind of like being 'slowed down' by passing through a thick syrup," explained James Overduin, a physicist at Towson University in Maryland.

Some particles have a harder time trudging through the syrupy Higgs field than others, and as a result, they're heavier. However, it isn't known why certain particles, such as the extremely corpulent top quark, are thousands of times more encumbered by the Higgs field than are lightweight particles, such as electrons and neutrinos. "Theorists have been searching for some way to actually predict [particle] masses from first principles. No convincing theory has yet emerged," said John Gunion, author of "The Higgs Hunter's Guide" (Basic Books, 1990) and a professor of physics at the University of California, Davis. [Are There Higgs Bosons in Space?]

Particles trudge through the Higgs field by exchanging virtual Higgs particles with it. And a real Higgs particle surfaces when the field becomes excited, like a slosh of the syrup. Detecting such a slosh (i.e. the particle) is how physicists can be sure the syrup (i.e. the field) exists. "You have to get enough energy to excite the field so that it looks like a particle to us. Otherwise we don't know the field is there," Craig Blocker, a Higgs-hunting physicist at Brandeis University, told Life's Little Mysteries.

But because the Higgs particle is extremely high-energy (or, equivalently, very heavy), it's tough to excite the Higgs field enough to create one. That's where the Large Hadron Collider comes in: by smashing together high-speed protons, it generates enough juice to slosh the syrupy Higgs field around now and again, producing Higgs bosons.