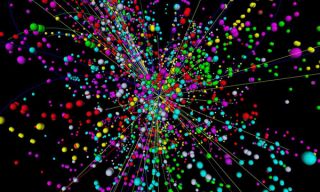 A simulation of a particle collision inside the Large Hadron Collider. When two protons collide inside the machine, they create an energetic explosion that gives rise to new and exotic particles - including, perhaps, the Higgs boson.
(Image: © CERN)

Physicists at the Large Hadron Collider, a particle accelerator near Geneva, Switzerland, report that they're hot on the trail of an elusive elementary particle known as the Higgs boson. It's only a matter of time before they'll have the infamous "God particle" in handcuffs, they say. But after years of particle- and head-bashing at the LHC, one burning question is whether there's an easier way to do this. Instead of constructing an 18-mile-long, high-energy collider to generate a Higgs particle from scratch, couldn't we just go look for one in nature?

And if so, where in space might it be?

John Gunion, first author of "The Higgs Hunter's Guide" (Basic Books, 1990) and a professor of physics at the University of California, Davis, said Higgs bosons regularly pop into existence all over space. Quantum fluctuations — momentary bursts of energy from nowhere that are permitted by the rules of quantum mechanics — cause pairs of the particles to spontaneously arise out of the vacuum, then annihilate each other an instant later. Because these freebie Higgs have extremely high energies, the rules of quantum mechanics dictate that they don't get to stick around for as long as lesser particles would. So, if you're a Higgs hunter, how much time do you have to catch these bosons before they disappear? "Shorter than 1-trillionth-of-1-trillionth of a second," Gunion said. [Higgs Particle Cornered at LHC]

Gordon Kane, a professor of physics at the University of Michigan and co-author of "The Higgs Hunter's Guide," said that a quantum fluctuation is rare in any one place. "But there are lots of places it can happen (all of space), so altogether it happens pretty often, but you aren't there to see it." Space Higgs: Like a tree falling in a forest with no one there to hear the crash.

Aside from strange quantum effects, there are several other events in space that produce Higgs bosons, the physicists said.  "Black holes give off pairs of Higgs bosons, among many other things," Gunion said. "They produce these Higgs particles at their horizons, and if you put a detector there, you would see them. But the detector would be gobbled up pretty quick by the black hole."

Unfortunately we can't just aim our earthbound telescopes at black holes and hope to glimpse a Higgs, because the particle will have decayed long before getting here, he added. [Can Anything Escape from a Black Hole?]

Supernovas, the explosions of dying stars, produce bursts of particles that are moving fast enough to create Higgs bosons when they collide. (Imagine the particle collisions at the LHC, but in space.) However, getting a close look at a Higgs from a supernova is just as tricky as peering at one from a black hole: Your detector would have to be sitting next to the supernova aimed at exactly the right place at exactly the right time to see the Higgs before it decays. And then, of course, the detector would get destroyed by the stellar explosion.

Lastly, perhaps the deepest question of all is why Higgs bosons — which draw so much attention from scientists because they are the particles that imbue all other particles with their mass — don't exist everywhere all the time. In short, if there's no Higgs in me, why do I not weigh zero pounds?

"That's a complicated question," said Craig Blocker, a Higgs-hunting physicist at Brandeis University. "It has to do with quantum mechanics. In quantum theory, all particles correspond to what we call fields. For example, electromagnetic fields are what photons (particles of light) correspond to, and the Higgs particle corresponds to the Higgs field. Each particle has its own field, and most fields are everywhere all the time. But you have to get enough energy to excite those fields so that it looks like a particle to us. Otherwise we don't know the field is there."

Quantum fluctuations, black holes and supernovas all have what it takes to make the Higgs field look like a Higgs particle. However, because these events happen too far away and for too short a time, it seems that the LHC is our best bet.