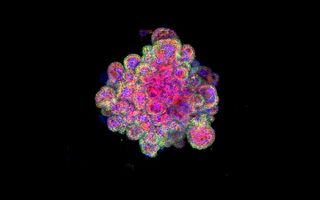 In this confocal image of a miniplacenta — made of placental cells called trophoblasts — colorful stains reveal different proteins.
(Image: © Centre for Trophoblast Research)

You can add another miniorgan to the growing list of tiny, simplified body parts that scientists have grown in a lab. This time around, it's miniplacentas.

The wee placentas were recently grown from cells in a laboratory and are remarkably similar to the real thing. In fact, they resemble placentas so accurately that the miniorgans can be used as stand-ins, in studies of placental behavior during the first weeks of pregnancy, according to a new study.

Just like a regular placenta, the 3D miniplacentas feature differentiated placenta cell types (in other words, a variety of cells) and organ structures. They even secrete hormones that are unique to placentas and are capable of producing a positive result in an over-the-counter pregnancy test, the scientists discovered.

And by growing and studying these miniature organs — also known as organoids — in the lab for the first time, researchers can develop a more accurate picture of how placentas form. They can also better understand disorders that emerge in the first trimester and affect fetal development or even lead to miscarriage, and they can discover how certain drugs could affect the health of the placenta, according to the study. [11 Body Parts Grown in the Lab]

Placental cell research spans decades, but never before have scientists been able to grow organoids that replicate placentas so closely, said lead study author Margherita Yayoi Turco, a research fellow with the Centre for Trophoblast Research at the University of Cambridge in England.

"What is unique about this system is that we have never had any model to study the formation of the human placenta in a dish," Turco told Live Science in an email.

Part of what makes studying the human placenta so difficult is that it's unlike placentas in other animals — even those of closely related primates. And it's very different from a mouse placenta, the animal model used most frequently by researchers, she added.

Unlike the human body's other organs, placentas only begin to grow after an egg has been fertilized in a sexually mature adult; once this fertilized cell cluster embeds in the uterine wall, the fetus and placenta begin to develop together, according to the National Institutes of Health (NIH).

A placenta is made up of many types of specialized cells, but certain cells called trophoblasts are critical for key functions, such as anchoring the placenta to the uterine wall, forming a protective barrier, transferring oxygen and nutrients to the embryo and secreting hormones into the mother's body. For that reason, the researchers grew their organoids exclusively from trophoblast cells, Turco said.

For the study, the scientists collected cells from the placentas of women in their first trimester of pregnancy — about six to nine weeks — and then cultured the cells on scaffoldings in the lab. After 10 to 14 days, the cells grew into 3D organoids. And the tiny organs were hardy — one year later, three miniplacentas were still healthy and growing, the study authors reported.

Most importantly, the miniature placentas were close models of normal, human-size placentas. They developed the placenta's branching structures and secreted special placental hormones, including human chorionic gonadotropin (hCG) hormone, which is detected by pregnancy tests.

The miniature organ models could help scientists to better understand how infectious agents interact with placentas, Turco said. For example, Zika virus can cross the placenta to affect cells in the fetal brain. However, dengue — a virus in the same family as Zika — stops at the placental barrier and does not infect the fetus.

"We can start looking at how the trophoblast is a barrier to most infections and only lets some through," Turco said.

The findings were published online today (Nov. 28) in the journal Nature.