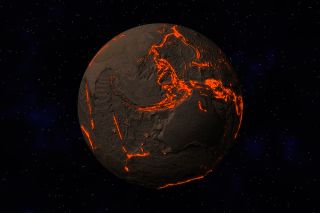 At earthquake-prone subduction zones, where tectonic plates dive beneath one another, massive amounts of sea water are dragged into the planet's interior, a new study has revealed.
(Image: © visdia/Getty)

As Earth's tectonic plates dive beneath one another, they drag three times as much water into the planet's interior as previously thought.

Those are the results of a new paper published today (Nov. 14) in the journal Nature. Using the natural seismic rumblings of the earthquake-prone subduction zone at the Marianas trench, where the Pacific plate is sliding beneath the Philippine plate, researchers were able to estimate how much water gets incorporated into the rocks that dive deep below the surface. [In Photos: Ocean Hidden Beneath Earth's Surface]

The find has major ramifications for understanding Earth's deep water cycle, wrote  marine geology and geophysics researcher Donna Shillington of the Lamont-Doherty Earth Observatory at Columbia University in an op-ed accompanying the new paper. Water beneath the surface of the Earth can contribute to the development of magma and can lubricate faults, making earthquakes more likely, wrote Shillington, who was not involved in the new research.

Water is stored in the crystalline structure of minerals, Shillington wrote. The liquid gets incorporated into the Earth's crust both when brand-new, piping-hot oceanic plates form and when the same plates bend and crack as they grind under their neighbors. This latter process, called subduction, is the only way water penetrates deep into the crust and mantle, but little is known about how much water moves during the process, study leader Chen Cai of Washington University in St. Louis and his colleagues wrote in their new paper.

"Before we did this study, every researcher knew that water must be carried down by the subducting slab," Cai told Live Science. "But they just didn't know how much water."

The researchers used data picked up by a network of seismic sensors positioned around the central Marianas Trench in the western Pacific Ocean. The deepest part of the trench is nearly 7 miles (11 kilometers) below sea level. The sensors detect earthquakes and the echoes of earthquakes ringing through Earth's crust like a bell. Cai and his team tracked how fast those temblors traveled: A slowdown in velocity, he said, would indicate water-filled fractures in rocks and "hydrated" minerals that lock up water within their crystals.

The researchers observed such slowdowns deep into the crust, some 18 miles (30 km) below the surface, Cai said. Using the measured velocities, along with the known temperatures and pressures found there, the team calculated that the subduction zones pull 3 billion teragrams of water into the crust every million years (a teragram is a billion kilograms).

Seawater is heavy; a cube of this water 1 meter (3.3 feet) long on each side would weigh 1,024 kilograms (2,250 lbs.). But still, the amount pulled down by subduction zones is mind-boggling. It's also three times as much water as subduction zones were previously estimated to take in, Cai said.

And that raises some questions: The water that goes down must come up, usually in the contents of volcanic eruptions. The new estimate of how much water is going down is larger than estimates of how much is being emitted by volcanos, meaning scientists are missing something in their estimates, the researchers said.  There is no missing water in the oceans, Cai said. That means the amount of water dragged down into the crust and the amount spouted back out should be about equal. The fact that they aren't suggests that there's something about how water moves through the interior of Earth that scientists don't yet understand.

"Many more studies need to be focused on this aspect," Cai said.