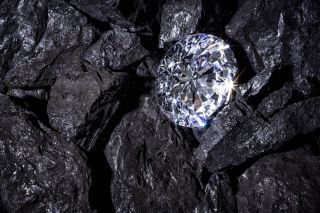 That special mineral that humans use to profess their love for one another? It might not be so special. A new study suggests that Earth's interior is filled with a quadrillion tons of diamonds.

A new study published in June in the journal Geochemistry, Geophysics, Geosystems suggests that there are 1,000 times more diamonds below the surface of the Earth than was previously thought.

But these diamonds are unreachable: They're located about 90 to 150 miles (145 to 240 kilometers) below the surface of the Earth in the "roots" of cratons, which are large sections of rock. Cratons lie beneath most continental tectonic plates and have barely moved since ancient times, according to a statement from MIT News. [Photos: The World's Weirdest Geological Formations]

A group of researchers from various universities around the world discovered the glitzy stash by looking at seismic waves beneath the Earth. Because these vibrations can change, based on the composition, temperature and density of various rocks that it hits, researchers can use these recordings to construct an image of the unreachable interior of the Earth.

They found that the underground vibrations, produced from natural processes such as earthquakes and tsunamis, tended to speed up when passing through cratonic roots; the speedup was greater than would be expected from the fact that cratons tend to be colder and less dense than surrounding structures (both of which are conditions that would speed up the waves).

Using records of seismic activity that were kept by government agencies such as the U.S. Geological Survey, the team created a three-dimensional model of the velocities of seismic waves that traveled through the planet's major cratons. Then, they created "virtual rocks" from various combinations of different minerals and calculated how fast seismic waves would travel through those rock compositions.

They found that the best explanation for the speeds actually observed underground versus those predicted in their virtual rock models was that 1 to 2 percent of the roots of the cratons was made up of diamonds, while the rest was made up of peridotite (the main type of rock in Earth's upper mantle) and a little bit of eclogite rocks (from the ocean's crust).

When "waves pass through the Earth, diamonds will transmit them faster than other rocks or minerals that are less stiff," said Joshua Garber, a postdoctoral student at UC Santa Barbara and lead author of the study.

Though "we found that much of the data were best explained by diamond … we cannot say for certain," Garber said. Since it's difficult to directly sample these regions (but not impossible, since sometimes parts of these cratonic roots are brought to the surface from erupting magma), this is the best explanation right now, Garber said.

But other researchers have suggested some alternative explanations: Perhaps, these cratonic rocks are cooler than what the literature suggests, which means the rock will be stiffer — and thus, seismic waves will travel more quickly through them — even without the diamond or eclogite rocks, Garber added. However, based on their data, he thinks this latter scenario is less likely.

"Our understanding of the deep Earth continues to improve as we make more measurements, do more experiments and occasionally get samples," Garber said. "I suspect we will continue to be surprised by what we find."