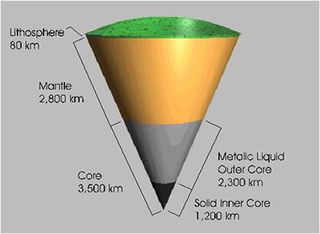 The global "hum" of the Earth is now helping scientists probe the planet's deep interior, a group of researchers say.

Since this hum — called seismic noise, which is generated by sources such as storm-driven ocean waves — is detectable everywhere on Earth, it could help scientists analyze the innards of the planet worldwide, investigators added in a new study detailed in the Nov. 23 issue of the journal Science.

Traditionally, researchers peer into the interior of the Earth by analyzing seismic waves generated by earthquakes. The way seismic waves zip through the planet depends on physical properties of the Earth's innards, such as rock composition, temperature and pressure. As such, the way the waves behave offers useful clues about details of Earth's geology that are otherwise largely hidden from view.

The problem with this strategy is that it depends on earthquakes. "Large earthquakes are rare —fortunately!" Campillo said. Quakes also mostly recur in specific places, which leads to some areas being imaged well but leaving others relatively obscure.

In addition to seismic waves from earthquakes, the interior of the Earth is pervaded by seismic noise, a collective hum resulting from the bombardment of Earth's surface by a variety of sources, such as the swelling of oceans during storms.

"The noise was regarded as useless and even problematic since it hides slight earthquake signals," Campillo said.

However, in recent years, by analyzing large amounts of seismic data collected over time, investigators successfully followed ambient seismic noise waves as they rippled across Earth's surface. Now scientists reveal they can also use ambient noise to image Earth's deep interior. The advantage of this strategy is that "ambient noise imaging can be applied in regions without earthquakes," Campillo said.

"Finland was a good place because it is a place with very old and homogeneous crust," Campillo said. Its old age meant it had little in the way of new activity to confuse readings, while its uniform nature meant there was little diversity of material to complicate findings.

"These changes of microstructures result in increase of seismic speeds, which we eventually detect when waves are reflected on the layers where they occur," Campillo said.

Ultimately, ambient seismic noise might not only help researchers scan the mantle transition zone — where the upper and lower layers meet — but also probe all the way down to the core-mantle boundary.

"Ambient noise is another element in the geophysicist's toolbox," Campillo said. "Our study suggests that it could be developed everywhere, allowing for new collections of observations at the global scale."