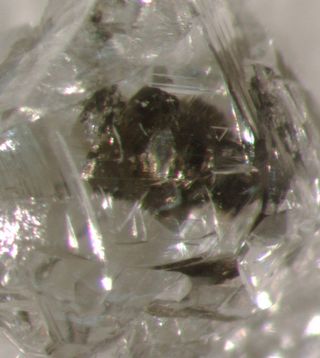 Optical photomicrograph of a sulfide-inclusion-bearing rough diamond from the Orapa kimberlite, Botswana.
(Image: © Steven B. Shirey, Carnegie Institution of Washington)

Diamonds from deep within the Earth reveal that the motions of tectonic plates responsible for the drifting of continents and the birth of mountains likely started up about 3 billion years ago.

The collisions, growth and shifting of tectonic plates have changed the face of the planet since its birth some 4.5 billion years ago. However, much remains unknown about what plate tectonics was like early  in Earth's history, or if it even operated at all, due to the dearth of rocks that age. (Most of Earth's oldest rock has been recycled  by plate tectonic processes, shoved down into Earth's molten mantle where it melts and reforms as new rock.)

Now scientists have mined valuable clues about the onset of plate tectonics from tiny mineral grains in more than 4,000 diamonds that formed 80 to 110 miles (125 to 175 kilometers) deep in the Earth's mantle layer.

These gems, brought to the surface by volcanic eruptions, were uncovered in five ancient continents by researchers over the course of more than 30 years. The investigators cracked opened the diamonds and analyzed the composition of mineral inclusions within, specks as small as the width of a human hair.

"We're using some of the smallest mineral grains we can chemically analyze to try to learn more about some of the largest features that exist on the Earth, the continents," researcher Steven Shirey, a geochemist at the Carnegie Institution of Washington, told OurAmazingPlanet.

Before 3 billion to 3.2 billion years ago, these inclusions resembled peridotite, a course-grained igneous rock common in the mantle. These globs later became more like eclogite from ocean crust, a sign that surface material was getting mixed into the mantle, most likely as ocean plates dove beneath continental ones and sank. This suggests plate tectonics kicked in about 3 billion to 3.2 billion years ago.

Future research could look at diamonds from even deeper within the Earth to better understand   geological processes within the mantle, Shirey said.

Shirey and colleague Stephen Richardson of the University of Cape Town in South Africa detailed their findings in the July 22 issue of the journal Science.