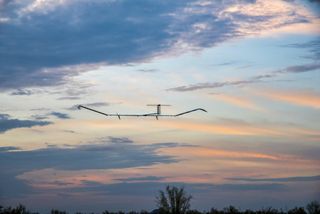 The Airbus Zephyr drone launches for its record-setting flight on July 11.
(Image: © Airbus)

A solar-powered drone designed to take on the multimillion-dollar market for satellites in space has set a  record by staying in flight at high altitude for nearly 26 days. Airbus has plenty of plans for its so-called pseudo-satellite, including possible military reconnaissance and monitoring the spread of wildfires, among other activities.

The European aerospace consortium Airbus announced that the latest model of its Zephyr drone had landed near Yuma, Arizona, late last week, after staying on the wing continuously for 25 days, 23 hours and 57 minutes, and breaking a world record for long-endurance flight.

The drone was driven by electric power from solar panels on its wings during daylight, when it flew at altitudes above 70,000 feet (21,300 meters), Airbus spokesman Alain Dupiech told Live Science.

At night, the drone used stored battery power, dropping to around 50,000 feet (15,240 meters) by morning — well above any clouds and bad weather, and higher than regular air traffic, except military spy planes, Dupiech said. [Supersonic! The 11 Fastest Military Airplanes]

Previously, the endurance record was held by an older prototype of the Zephyr drone, which stayed airborne 14 days in 2014.

Airbus hopes the latest Zephyr drone will take on some of the commercial market for satellite launches into Earth orbit, by carrying out tasks like high-altitude photography and environmental monitoring for weeks or months at a time.

"It's pretty encouraging," Dupiech said. "We're demonstrating that the first production series unit is a lot better than the prototype."

Airbus calls its Zephyr drone a HAPS, or high-altitude pseudo-satellite.

A typical rocket launch to put satellites into Earth orbitcan cost tens or hundreds of millions of dollars, and Airbus thinks that high-flying long-endurance drones like the Zephyr can do a better job at many tasks than satellites, and at much lower costs.

HAPS can also be refitted on the ground and redeployed on different missions – but satellites are usually committed to only one task, such as communications or environmental monitoring, and typically carry out the same task for many years.

The Zephyr project manager for the Airbus consortium, Sophie Thomas, told Live Science in an email that one of the key applications for the drone would be in providing internet connectivity to users on the ground.

Airbus faces competition in that potential market, from high-altitude balloon-based internet experiments like Project Loon from the X lab at Alphabet (formerly Google).

Thomas said high-flying drones like Zephyr could be much more maneuverable and flexible in Earth orbit than either high-altitude balloons or satellites.

"[Zephyr] can be re-tasked instantly to operate over a different location," she said. "We can land and swap out the payload to undertake different missions, or to take immediate advantage of technology upgrades for the payload."

The altitudes that the Zephyr drone can fly at also made it more suitable than satellites in a geostationary Earth orbit (GEO) — which orbit Earth much higher up — for many applications, Thomas said.

"It operates at around 20 kilometers [12 miles] from the Earth, compared to GEO satellites at around 36,000 km [22,000 miles]," she said. "This means we can capture much higher-resolution imagery and video for applications such as disaster management. It also means we have a lower latency for communications."

Thomas said that one of the technical breakthroughs of the latest Zephyr drone was bringing down the total weight of the aircraft. [5 Surprising Ways Drones Could Be Used in the Future]

The new batteries on the latest Zephyr means it could stay in flight for more than 100 days; it also has a more efficient solar array and a more efficient propulsion system than the 2014 prototype, Thomas said.

"We have secured improvements across the whole design, and it is the combined effect which gives us such a capable system," Thomas said.

Airbus has already put the latest model of the Zephyr drone into production in the U.K., and its first customer is the British Ministry of Defence [MOD], which runs the country's armed forces.

The Defense News website reported in July that the MOD was paying around 13 million pounds ($17 million) for the first three Zephyr drones, which will be operated on their behalf by Airbus.

Although the military won't say what their Zephyrs will be used for, their capabilities for reconnaissance and communications have been noted by the news media.

They include civilian tasks that might be unaffordable using satellites in orbit, or impractical with other high-altitude technologies, she said, such as monitoring the spread of wildfires and oil spills or recording the world's changing environmental landscape.