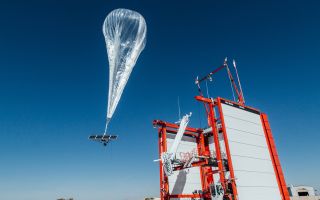 Mad scientists in science fiction get a bad rap. And it's their own fault; they do weird things like stitching together corpses and re-animating them with electricity, as Dr. Victor Frankenstein did in Mary Shelley's novel "Frankenstein," or building a time-traveling DeLorean powered by a plutonium-fueled nuclear reactor, a la Dr. Emmett Brown (Christopher Lloyd) in the "Back to the Future" films.

But real-life "mad scientist" Rich DeVaul (he bears the actual title "head of mad science" at X, The Moonshot Factory) believes mad science also has a positive side; it also means daring to do the improbable and creating technology that can change the world.

At X, formed in 2010 as a division of Google, and now a subsidiary of Google's parent company, Alphabet Inc., DeVaul is the senior technical leader of a group of inventors, engineers and designers tackling global problems. Some of their solutions, such as a balloon-powered internet initiative called Project Loon, have achieved liftoff, while other proposals, like a prototype space cannon, stalled and fizzled. But all of X's proposals have this in common: They're so outlandish, they just might work. [10 Sci-Fi Predictions That Came True]

For example, X's Project Loon was imagined as a fleet of balloons — each about the size of a tennis court — that would travel into the stratosphere and form a type of conveyer-belt network to provide high-speed internet access for users on the ground, according to the project website. These balloons could bring the internet to remote rural areas, or to regions affected by natural disasters.

Project Loon was put to the test after Hurricane Maria struck Puerto Rico in September 2017, and over several months, the balloons brought internet service to more than 200,000 people on the island, IEEE Spectrum reported.

Other X projects in development include Project Wing, an autonomous drone delivery service, and Makani energy kites, which would fly in loops to generate wind power through their propellers.

But for every proposal that succeeds in making the leap from the drawing board to production, there are many more that die on the vine. Ideas brainstormed at X also included a huge, ground-based cannon to fire equipment payloads into space, and an artificially engineered tornado farm for weather engineering. As exciting as these projects may sound, they were simply too impractical and expensive to get off the ground, DeVaul told an audience at the science and pop culture convention Future Con in Washington, D.C., on March 31.

But imagining seemingly ridiculous solutions is a critical part of developing innovative tech that does work — and DeVaul wants people everywhere to start doing just that.

To that end, DeVaul shared X's "secret sauce" for designing this sci-fi tech with the Future Con panel audience, so they could devise their own outlandish ideas. At the top of the list were making an imaginative leap to envision radical solutions, and not being afraid to fail, "because failure is actually the process by which we learn how to do something new," DeVaul said. [5 Amazing Technologies That Are Revolutionizing Biotech]

One preteen audience member at Future Con rose to the challenge by proposing his own wacky scheme: solving the energy crisis by traveling to Mercury and bringing back "something" that would address all of Earth's energy needs. He hadn't quite worked out what that something would be, but the near absurdity of the proposal "is exactly the sort of thing that inspires us," DeVaul told Live Science.

In fact, space-travel research inspired a technology that is now widely used on Earth to convert sunlight into energy: solar panels. So, it's not entirely impossible to imagine that a mission to Mercury could, one way or another, lead to a discovery that would ultimately benefit our quest for clean energy.

"So, never dismiss even a 'crazy' statement!" DeVaul said. "Follow that, and see where it leads you — and sometimes, it leads you in really amazing directions."

Of course, coming up with a great idea, hard as it is, is still the easy part. Finding money to make it a reality is somewhat harder, though not impossible, DeVaul said. Wannabe "mad scientists" with schemes for novel and unconventional problem-solving tech could develop prototypes of their ideas through venture capital, or they could crowdsource funding on platforms like Kickstarter, DeVaul told Live Science.

"If there's a problem that you really care passionately about and you're willing to try things that may not work, almost anybody can do this — although it requires tremendous work," he said. "You build a team, you find the resources, and then eventually, your small, dedicated group can change the world."