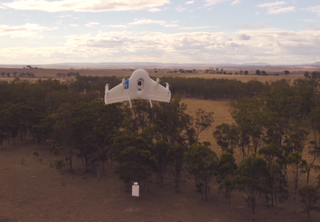 Move aside, Amazon: Google has revealed its own top-secret drone project.

"Project Wing," as the drone program is called, is a product of the company's secretive moonshot lab, Google X. More than two years in the making, the technology — which is still in the early phase of its development — was first demonstrated in mid-August in Queensland, Australia, The Atlantic reported.

Just as the Postal Service and FedEx revolutionized mail delivery, systems like Project Wing could be the next frontier, its makers say. [9 Totally Cool Uses for Drones]

"Throughout history there have been a series of innovations that have each taken a huge chunk out of the friction of moving things around," Astro Teller, the leader and so-called "Captain of Moonshots" at Google X, said in a YouTube video. "'Project Wing' aspires to take another big chunk of the remaining friction out of moving things around in the world."

The prototype drone is a hybrid between a plane and a helicopter, and is slightly larger than a seagull, according to The Atlantic. It takes off in a vertical position and later rotates to horizontal for flying. When it reaches its destination, the drone switches back to a vertical position and hovers as it lowers the package down on a cable. A small kit of sensors at the end of the cable, called the "egg," detects when the package has reached the ground, and then retracts back into the drone.

For the initial demonstration, the drone delivered candy bars and dog treats to a farmer on a cattle ranch near Warwick, Australia.

Why Australia? The land down under has more relaxed policies for remotely piloted aircraft than the United States does, according to The Atlantic. And Google has partnered with a company called Unmanned Systems Australia.

Nick Roy, a roboticist at the Massachusetts Institute of Technology, in Cambridge, took a two-year sabbatical to lead the project. His goal is to figure out if delivery drones are a sensible idea, and to determine whether Google should pursue the service. Customers won't be able to have packages delivered by a drone anytime soon, but the team has at least shown that the system works.

Leading the next phase of Project Wing is Dave Vos, founder of Athena Technologies, a Warrenton, Virginia-based drone software company that was purchased by the avionics company Rockwell in 2008. Vos' job is to turn the project into a usable service, according to The Atlantic.

Online retail giant Amazon revealed similar plans for a same-day drone-delivery service in December 2013, called Amazon PrimeAir. CEO Jeff Bezos announced that its drones would be able to deliver packages to a customer's doorstep within 30 minutes of the order being placed.

Both Google and Amazon will need to prove that their systems are safe and gain approval from the Federal Aviation Administration before they can fly. The FAA is expected to release regulations for the use of commercial drones in 2015.