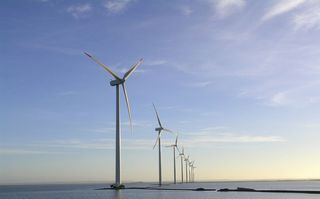 Wind power could supply all the energy needs of much of the East Coast and then some, if a phalanx of wind turbines running from Massachusetts to North Carolina were installed offshore, a new study concludes.

Though local residents often object to wind farms intruding on their landscape and views, wind power has become an increasingly attractive option for generating clean energy and reducing greenhouse gas emissions for several countries. Offshore wind farms in Denmark and the United Kingdom are now used to generate electricity, with Denmark drawing 20 percent of its energy from wind power.

But determining just how much ocean area is available and how much energy a wind farm can actually produce is tricky and had yet to be done for this area of the Atlantic.

"In doing our surveys and watching the public debate, we saw that no one had solid empirical data on the actual size of the offshore wind resource, and we felt this was important for policy decisions," said study author Willett Kempton of the University of Delaware.

Oceans make ideal locations for wind turbines because they "are particularly windy all over," Kempton said. The ocean's surface isn't littered with hills, trees and houses like the land is, so winds over the water are faster because there is less friction to slow them down.

The wind turns the three blades of the turbine, and their rotation is converted into electricity by a generator.

The Middle Atlantic Bight, a region of the Atlantic Ocean that runs from Cape Cod, Massachusetts to Cape Hatteras, North Carolina, turns out to be an ideal setting for wind turbines because it is a large area of shallow water, Kempton said

Locating a large body of shallow water is important because with current technology, turbines can only be built out to a depth of 20 to 30 meters (close to 20 or 30 yards). Otherwise, it is too difficult to erect the metal pole that the turbine sits atop.

However, experimental turbines have been built out to a depth of 50 meters off the coast of Scotland. These types of turbines may be in commercial use soon, Kempton said, and with reasonable additional costs, he forsees building them out to a depth of 100 meters.

"Anything deeper than that, and you're talking science fiction," Kempton told LiveScience.

To estimate how much area would actually be available to place wind farms on in the Middle Atlantic Bight, the researchers had to exclude areas used for bird flyways, toxic waste sites and shipping lanes.

"We don't want to compete with that use," Kempton said.

The researchers also had to consider that wind turbines must be spaced half a mile apart, otherwise they create turbulence that interferes with other turbines.

Even with all those allowances, the energy needs of most of the East Coast could be met, or even surpassed, with the installation of over 160,000 turbines, according to Kempton's findings. But to achieve that energy, the turbines would have to be built out to a depth of 100 meters, according to the research published in the Jan. 24 issue of the journal Geophysical Research Letters.

The reduced use of fossil fuels would reduce greenhouse gas emissions from the area by 57 percent, even in New England, one of the world's most highly polluting areas, according to the study.

"The fact that we could get such huge reductions there gives me hope for other places," Kempton said.

Proposals for offshore wind farms have met with mixed opinions: residents of Cape Cod are vocal in their opposition to such a project, but those in nearby Delaware support building the turbines.

There would be "a realistic set of pluses and minuses--there would be some bird kills," Kempton said. But he pointed out that the pylons actually create habitat for fish, the turbines would not be visible from shore and local weather effects would be negligible.

Even with local opposition, Kempton thinks it is likely that one of these projects will be built. "I think it's a 100 percent probability," Kempton said.

And the whole area doesn't have to be built at once. He said: "It definitely could be done on a state-by-state basis."