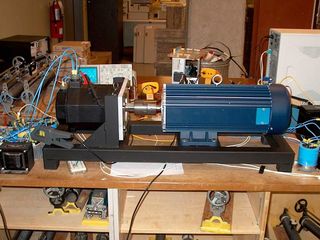 Workbench windmill: The generator (left) and the motor used as a turbine emulator.
(Image: © Andy Knight)

Engineers have developed the guts of a small-scale windmill that could one day help power individual homes.

Most efforts at harnessing wind for electricity focus on large, commercial wind farms.

Personal windmills could be useful in rural settings where space is ample and electricity sometimes costly. But before they could ever effectively supplement regular power supplies, more efficient systems are needed.

The new prototype is headed in that direction.

"We have developed a simple, reliable, controller for small scale wind energy generators that is cheaper than competing technologies," says Andy Knight, a professor of electrical and computer engineering at the University of Alberta.

In the lab, Knight's team put together a computer control and a DC motor to simulate what would happen outside, tweaking the setup to work in a light breeze. They say a real system could be built based on their results using simple and inexpensive components.

"Our research focus was the development of the simple control scheme to expand the operating range of the generator," Knight told LiveScience.

Most small-scale generators require wind speeds of at least 11 mph (18 kilometers per hour) to generate any power, the scientists say. The new device would work with winds of just 6 mph (10 kph).

The results were published recently in the journal IEEE Transactions on Energy Conversion.