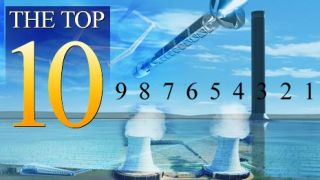 Scientists are racing to perfect greener sources of energy to improve the environment and reduce dependence on oil and other fossil fuels. Some predict a hydrogen economy. Others say solar is the way to go. Wilder schemes involve sky-high wind turbines or antimatter engines. LiveScience explores the expectations, myths and realities of 10 top possibilities.

Antimatter is the Bizarro twin of matter, made up of antiparticles that have the same mass as ordinary matter but with opposite atomic properties known as spin and charge. When the opposed particles meet, they annihilate each other and release tremendous amounts of energy as dictated by Einstein’s famous equation, E=mc2.

Antimatter is already in use in a medical imaging technique known as positron emission tomography (PET), but its use as a potential fuel source remains in the realm of science fiction.

The problem with antimatter is that there is very little of it in the universe. It can be produced in laboratories, but currently only in very tiny amounts, and at prohibitively high costs. And even if the problem of production could be solved, there is still the knotty question of how to store something that has a tendency to annihilate itself on contact with ordinary matter, and also how to harness that energy once created.

NASA funds research into creating antimatter drives that could one day take humanity to the stars, but dreams of antimatter-powered starships as seen on Star Trek are still a long way off, all experts agree.

At first glance, hydrogen fuel cells might seem like the perfect alternative to fossil fuels. They can generate electricity using only hydrogen and oxygen and are pollution free. An automobile running on hydrogen fuel cells would not only be more efficient than one powered by an internal combustion engine, its only emission would be water.

Unfortunately, while hydrogen is the most abundant element in the universe, most of it is bound up in molecules such as water. That means pure unbound hydrogen must be produced with the help of other energy sources -- which in many cases involve fossil fuels. If that’s the case, then many of the environmental benefits of hydrogen as a fuel are negated. Another problem with hydrogen is that it cannot be compressed easily or safely, and requires large tanks to store. Also, for reasons that are not fully understood, hydrogen atoms have a tendency to bleed through the materials encasing them, thus weakening their containers.

Albert Einstein told us that the line between matter and energy is a fuzzy one. Energy can be produced by either splitting or combining atoms—processes known as fission and fusion respectively.

Nuclear fission releases harmful radiation and produces large amounts of radioactive material, which can remain active for thousands of years and can destroy entire ecosystems if leaked. There is also concern that nuclear material could be used in weapons.

Currently, most nuclear power plants use fission, as fusion requires tremendous amounts of energy to produce and maintain the necessary high temperatures. But a natural phenomenon known as sonoluminescence might one day provide a means of duplicating the power of the stars—which are themselves just giant nuclear fusion reactors -- in a beaker of liquid.

Sonoluminescence refers to the flash of light produced when special liquids are struck by high-energy sound waves. The sound waves rip through the liquid and produce tiny bubbles that rapidly expand and then violently collapse. Light is produced in the process, but more importantly, the insides of the imploding bubbles reach extremely high temperatures and pressures -- enough, some scientists speculate, for nuclear fusion to occur.

Oceans cover 70 percent of the Earth, and water is a natural solar energy collector. OTEC, or ocean thermal energy conversion, aims to exploit this fact and use the temperature differences between surface water heated by the sun and water in the ocean's chilly depths to generate electricity.

Closed Cycle: A liquid with a low boiling point like ammonia is boiled using warm seawater. The resulting steam is used to operate an electricity-generating turbine; the vapor is then cooled using cold seawater. Open Cycle: Similar to the closed cycle OTEC, except there is no intermediate liquid. The warm seawater is converted into low-pressure vapor that is used to generate electricity. The vapor is then cooled and turned into usable fresh water with cold seawater. Hybrid Cycle: A closed cycle OTEC is used to generate electricity, which is then used to create the low-pressure environment necessary for the open cycle.

OTEC plants can double as fresh water sources and the nutrient rich seawater drawn from ocean depths can be used to culture marine organisms and plants. The major drawback of OTEC is that since they operate on such small temperature differences, generally about 36 degrees Fahrenheit (20 Celsius), they are only 1 to 3 percent efficient.

Whether falling, flowing, or otherwise moving in tides or under-ocean currents, water can be harnessed to produce electric power. Hydropower supplies approximately 20 percent of the world’s electricity. Until recently, it was generally believed that water energy is an abundant natural resource that requires no additional fuel and produces no pollution. Recent studies, however, challenge some of these claims and suggest that hydroelectric dams can produce significant amounts of carbon dioxide and methane through the decay of submerged plant material. In some cases, these emissions rival that of power plants running on fossil fuel. Another drawback of dams is that people often need to be relocated. In the case of the Three Gorges Dams Project in China -- which will be the largest dam in the world when completed in 2009 -- 1.9 million people were moved and countless historical sites were flooded and lost.

Biomass energy, or biofuel, involves releasing the chemical energy stored in organic matter such as wood, crops, and animal waste. These materials are burned directly to produce heat or refined to create alcoholic fuels like ethanol.

But unlike some other renewable energy sources, biomass energy is not clean, since burning organic matter produces large amounts of carbon dioxide. It may be possible, however, to offset or eliminate this difference by planting fast growing trees and grasses as fuel supplies. Scientists are also experimenting with using bacteria to break down biomass and produce hydrogen for use as fuel.

One exciting but controversial biofuel alternative involves a process known as thermal conversion, or TCP. Unlike conventional biofuels, TCP can convert practically any type of organic matter into high quality petroleum with water as the only byproduct, proponents claim. It remains to be seen, however, whether Changing World Technologies, the company that patented the process, can produce enough oil for it to become a viable fuel alternative.

Some call it black gold. Whole empires are based upon it; wars have been fought over it. One reason petroleum, or crude oil, is so valuable is because it can be transformed into a variety of products, everything from kerosene to plastic and asphalt. Whether it's a source for the future is hotly debated.

Estimates of how much petroleum is left in the Earth vary wildly. Some scientists predict that petroleum reserves will reach a peak and then rapidly decline as early as 2005; others believe that enough new reserves will be discovered to meet world energy needs for several more decades.

Like coal and natural gas, petroleum is relatively cheap compared to other fuel alternatives, but its use comes at the larger cost of environmental damage. Oil use produces large amounts of carbon dioxide, and oil spills can damage fragile ecosystems and are extremely difficult to clean up.

Taking the concept of windmills one step further, or higher, scientists want to create power stations in the sky by floating windmills 15,000-feet in the air. The strange crafts will be kept afloat by four propellers that double as turbines, and feed electricity back to earth through a cable.

Wind energy currently accounts for only 0.1 percent of the world’s electricity demands, but that number is expected to increase as wind is one of the cleanest forms of energy and can generate power as long as the wind blows.

The problem, of course, is that winds don’t always blow, and wind power cannot be relied upon to produce constant electricity. There is also concern that wind farms could impact local weather in ways that are yet to be fully understood. Scientists hope that taking windmills to the skies will solve these problems, since winds blow much stronger and more consistently at high altitudes.

Coal was the fuel that powered the Industrial Revolution, and it has played an increasingly larger role in meeting the world's energy needs ever since. The major advantage of coal is that there is lots of it, enough to last the world for another 200-300 years at current rates of consumption.

While its abundance makes it very economical, burning coal releases impurities like sulfur and nitrogen into the air, which can combine with water in the atmosphere to form acid rain. Burning coal also produces large amounts of carbon dioxide, a gas that according to most climate scientists contributes to global warming. Major efforts are underway to find new ways of making coal burn cleaner and to recover waste coal, a formerly unusable byproduct of coal mining.

If things go according to plan, construction on a giant solar tower could begin in Australia in 2006. The 3,280-foot tall tower will be surrounded by a vast greenhouse that will heat air to drive turbines around the base of the tower. It is estimated that the power station will be able to generate 200 megawatts of electricity, enough to power 200,000 households.

Solar energy requires no additional fuel to run and is pollution free. Sunlight can be captured as usable heat or converted into electricity using solar, or photoelectric, cells or through synchronized mirrors known as heliostats that track the sun’s movement across the sky. Scientists have also developed methods for using solar power to replace a gas-powered engine by heating hydrogen gas in a tank, which expands to drive pistons and power a generator.

Drawbacks of solar energy include high initial cost, and the need for large spaces. Also, for most solar energy alternatives, productivity is subject to the whims of air pollution and weather, which can block sunlight.