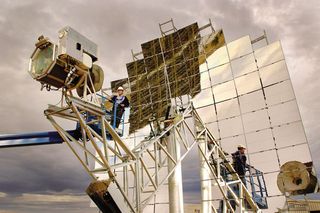 Applying the most efficient solar technology available, researchers are building a new power plant that utilizes the heat from sunlight to generate electric power.

The solar dish, as it's known, is a joint project between Stirling Energy Systems, Inc. (SES) and the National Nuclear Security Administration's Sandia National Laboratories.

Based in New Mexico, the prototype contains 82 mirrors that focus the Sun's rays, transmitting the heat energy to an engine filled with hydrogen. As the gas expands and contracts from heating and cooling, this motion drives pistons which power a generator that creates electricity.

Before January, five additional solar powered dishes and their engines are planned to boost the electricity production of the prototype to 150 kilowatts of electricity a day, enough to power 40 average households, according to researchers.

"A farm 100 miles by 100 miles in the southwestern U.S. hypothetically could provide as much electricity as is needed to power the entire country," said SES general manager Bob Liden.

The current project is not an abstract possibility for the future, however, and is actively selling electricity to power companies.

"These systems are currently grid-connected," Chuck Andraka, of Sandia Laboratory told LiveScience, "and are designed to offset peak power demands at the utility."

Commercial electricity providers use grids to supply power to regions of the country, and the grids are interconnected. Power can be fed in at practically any point and shared between providers.

Secured behind a fence to deter people and animals from approaching the test field, the mirrors have been vigorously tested to withstand vandalism. The dish is capable of operating in winds up to 35 mph. In addition to its robust design, the automated dish-engine systems are able to turn themselves off when there is no sunlight.

"These systems produce when the Sun shines only," Andraka said. "Maximum production is determined by the brightness of the Sun and ambient temperature. The more light, the more power."

Researchers hope to lower the cost of the $150,000 prototype to levels where the electricity produced by the solar dishes are comparable to that of other energy sources.

"This is the perfect type of electricity generation for the Southwest," Liden said. "It's a renewable resource, its pollution free, and the maintenance of a solar farm is minimal."