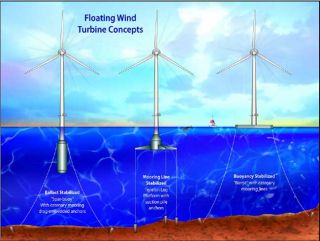 Among three designs for floating giant wind turbines in the deep ocean, MIT research is focusing on the tension leg platform (center), a system that oil companies use for deep-water rigs.
(Image: © National Renewable Energy Laboratory)

Windmills that would float hundreds of miles out at sea could one day help satisfy our energy needs without being eyesores from land, scientists said today.

Offshore wind turbines are not new, but they typically stand on towers that have to be driven deep into the ocean floor. This arrangement only works in water depths of about 50 feet or less—close enough to shore that they are still visible.

Researchers at the Massachusetts Institute of Technology and the National Renewable Energy Laboratory (NREL) have designed a wind turbine that can be attached to a floating platform. Long steel cables would tether the corners of the floating platform to a concrete-block or other mooring system on the ocean floor, like a high-tech ship anchor. The setup is called a "tension leg platform," or TLP, and would be cheaper than fixed towers.

"You don't pay anything to be buoyant," said Paul Sclavounos, an MIT professor of mechanical engineering and naval architecture who was involved in the design.

The floating platforms to sway side to side but not bob up and down. Computer simulations suggest that even during hurricanes, the platforms would shift by only about three to six feet and that the bottom of the turbine blades would revolve well above the peak of even the highest wave. Dampers similar to those used to steady skyscrapers during high winds and earthquakes could be used to further reduce sideways motion, the researchers say.

Like the offshore windmills currently in use, the TLP's would use undersea cables to shuttle the electricity to land.

The researchers estimate their floater-mounted turbines could work in water depths ranging from about 100 to 650 feet. This means that in the northeastern United States, they could be placed about 30 to 100 miles out at sea. Because winds are stronger farther offshore, the floating windmills could also generate more energy—5.0 megawatts (MW), compared to 1.5 MW for onshore units and 3.5 MW for conventional offshore setups.

To save money, assembly of the TLP's could be done onshore—probably at a shipyard—and towed out to sea by a tugboat, the researchers say.

Sclavounos estimates that building and installing the TLP's should cost a third of what it costs to install current offshore tower windmills. Another advantage of using floating platforms is that the windmills could be moved around. If a company with 400 wind turbines in Boston needs more power in New York City, it can unhook some of their windmills and tow them south.

The researchers plan to install a half-scale prototype of their invention south of Cape Cod.

"We'd have a little unit sitting out there to show that this thing can float and behave the way we're saying it will," Sclavounos said.