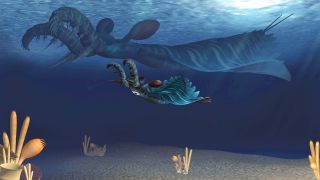 An artist's rendering shows a baby (foreground) and adult Lyrarapax unguispinus hunting the Cambrian seas like the creepy predators they were.
(Image: © Science China Press)

If you could dip your head into the oceans of Earth as they appeared 500 million years ago, you might see what looked like a spiny, disembodied claw cruising through the depths while trying to stuff an unfortunate piece of prey into its circular, fang-filled mouth. If you were lucky, you might even see a teeny-tiny baby claw bobbing along behind it.

A team of paleontologists from China, Australia and Germany has discovered one such baby claw fossilized in a piece of 518-million-year-old shale in Yunnan, China. The talon-shaped critter is actually a juvenile arthropod from the ancient predator Lyrarapax unguispinus, which hunted Earth's oceans during the Cambrian period (roughly 540 million to 490 million years ago).

Measuring a wee 18 millimeters, or 0.7 inches, long (about the diameter of a penny), the little tyke is the smallest complete L. unguispinus fossil ever discovered. And, according to a new study published June 1 in the journal National Science Review, this little baby was born to kill. [See Images of Bizarre Creatures from the Cambrian Period]

"Its adult-like morphology — especially the fully developed frontal appendages and [mouth] — indicates that L. unguispinus was a well-equipped predator at an early developmental stage," the researchers wrote in their new study.

The baby killer's built-in hunting gear provides further evidence that the spurt of biodiversity seen during the Cambrian explosion may have been driven partially by the sheer number of predators popping up throughout the seas.

As an arthropod, L. unguispinus is an ancient ancestor of today's spiders, scorpions and crustaceans, but — terrifyingly — it could grow to be more than 3.2 feet (1 meter) long. These colossal creepy-crawlers were among the world's earliest apex predators and were well equipped for the job, the researchers wrote.

Every L. unguispinus — even newborn babies, it seems — had a hard, claw-shaped raptorial (or grasping) appendage at the front of its head, which it used to capture and manipulate prey, the researchers wrote. To envision how these raptorial claws looked, see the modern arthropod known as the vinegarroon (so named for the twin streams of vinegar-like spray it shoots out of its bum when threatened).

Once an L. unguispinus caught you in its claws, the next stop on your tour of terror would probably be its toothy mouth. L. unguispinus belongs to a group of arthropods called Radiodonta, the researchers wrote, which translates to "radiating teeth." Radiodontans are characterized (as you might guess) by their circular mouths, filled with 360 degrees of serrated chompers.

The fact that even newborn radiodontans were born with developed teeth and claws could be evidence that species that first appeared during the Cambrian explosion faced tremendous competition with each other, the researchers wrote. This would give predators a strong incentive to evolve quickly, and ruthlessly.

"The predatory lifestyles of certain radiodontan offspring adds further tiering complexity to Cambrian marine food webs, and would have likely placed extra selective pressures on animal communities," the researchers wrote. "Intense predation occurring on all scales during the early phase of animal evolution was undoubtedly a critical driver behind the morphological and ecological innovations arising throughout the Cambrian."

In other words, the Cambrian period was literally a baby-eat-baby world. Let's all be thankful our squishy human babies don't have to face the same challenge.