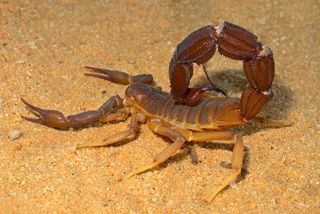 Between their pincers and venomous stingers, scorpions are formidable arachnids that few people would volunteer to tangle with. But for two scorpions looking to mate, "tango" is absolutely necessary. So just how do scorpions do it?

Scientists have identified about 2,200 species of scorpions across the globe, though the biology is only known for about 50 to 60 species, said scorpion expert Wilson Lourenço, emeritus research fellow at the National Museum of Natural History in Paris, France.

Given this extensive family tree, it should come as no surprise that there are a number of distinctive behaviors across species. But scorpion mating behaviors do share some general characteristics.

Mating among scorpions is associated with seasonal periods, with those animals living in temperate regions typically mating in the spring or summer and those in tropical regions mating during the rainy season.

If two or more males stumble upon one another while hunting for mates, they may get into skirmishes. But this is unlikely to happen often in the wild and is generally a phenomenon related to captivity.

"Many scorpion populations are so scarce that few individuals will meet in the field," Lourenço said.

Scientists know very little about scorpion sexual selection — that is, which qualities the arachnids find attractive and how sexually active individuals choose their mates. In some populations in which males come in various sizes, Lourenço said, the males of a "normal" size may have more reproductive success.

Whatever the case, once a male and female find each other and decide to mate, they engage in a complex courtship ritual called a "promenade à deux."

For this dance, the male will grab the female's pincers, or pedipalp chelae, with this own. He will then lead his dancing partner around as he searches for a suitable spot to deposit his spermatophore, or sperm packet.

In some cases, the female may resist the male's smooth moves by refusing to dance, trying to push him away, or even trying to sting him. [Sting, Bite & Destroy: Nature's 10 Biggest Pests]

The male may try to appease her with a "kiss," in which he grasps her chelicerae (pincer-like mouthparts) with his own. In at least one species, Megacormus gertschi, the male may sting the female in a soft part of her body, leaving his stinger in the female for up to nine minutes; it's unknown if he's actually injecting her with venom or some other substance to try to pacify her.

Once the male deposits his spermatophore, he leads the female over it so that she can take it up into her genital opening.

In all, courtship and mating normally lasts from 2–3 to 10–15 minutes, Lourenço said, adding that researchers have documented much longer periods in captivity but these cases were due to having improper substrate conditions (males couldn't find suitable spots for their spermatophores).

Deed done, the pair halts their dance and goes their separate ways.

Sexual cannibalism does sometimes occur (with the female attacking and eating the male), but this generally only occurs in species in which cannibalism is a normal part of "population regulation," where the animals live in high densities and potentially see each other as prey, Lourenço said. This temperament is rare, and some scorpions even show some social behavior, such as sharing burrows and food.

Interestingly, some species of scorpions also reproduce via parthenogenesis, in which the ovum develops without fertilization (no sexual activity required).